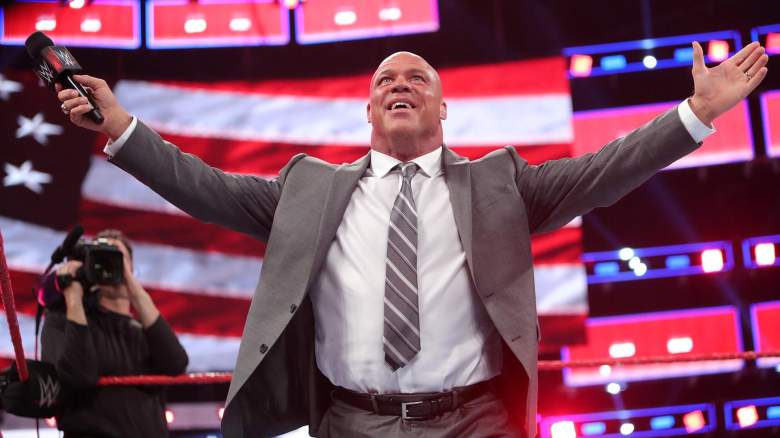 Kurt Angle is the new general manager of Monday Night Raw. With Angle now set to be on WWE programming basically every week, does this mean we should expect him back in the wrestling ring sometime soon?

The plan at this time is evidently for Kurt Angle to return to in-ring action at some point down the line. Veteran wrestling journalist Dave Meltzer reported this on Twitter this week, saying that the plan is for Angle to wrestle if he passes the WWE’s physical.

Plan is for him to wrestle if he passes physical https://t.co/wMq9Bjxx78

Angle is 48 years old, and he has suffered a fair number of injuries over the course of his career. However, he has performed in the wrestling ring very recently: for Northeast Wrestling in Connecticut on March 3rd, 2017.

However, Kurt Angle has not performed for the WWE in over 10 years. He was released from his WWE contract in 2016; he said at the time that he asked to be released for health reasons, in addition to wanting to spend more time with his family.

“I need my body to reheal and rehab, I have done this for too long without a break,” he told WWE.com. “I haven’t been able to really enjoy my life. I haven’t seen my family, I’ve had problems with medication – I’m just fried physically and mentally.”

Kurt Angle’s business manager also told WWE.com that Angle was in “a tremendous amount of pain” and that he was using prescription medication to deal with it. Angle in his WWE.com interview specifically cited an ECW event from August 2006 as being the precise moment he realized he had to stop.

“Early on in the match, I pulled my groin, but I kept going, feeding off the crowd,” he said. “Then I pulled my abdominal muscle off the pelvic bone, but I kept going as the crowd grew more wild. Finally, I blew out my hamstring, but we finished the match. The crowd stood and applauded – a standing ovation and that meant so much to me.”

But it wasn’t that long after Kurt Angle left the WWE that he ended up working for Total Nonstop Action. In fact, Angle signed with TNA the same year that he left the WWE. He would later explain that TNA was okay with giving him a reduced schedule, whereas the WWE was insisting he work full time.

“I didn’t have a choice,” Angle told WrestleTalk TV. “Vince McMahon wanted me to continue to go full time, and I couldn’t do the full time anymore. I look at John Cena now, and I don’t know how he’s done it for 11 years. I did it for six and a half.”

Angle has also said that he was addicted to Vicodin during the end of his tenure with the WWE, and it made him feel extremely guilty that in some way he was a liability for the WWE.

“Before I knew it, I was knee deep (more like shoulder deep) into my addiction,” Angle wrote on his website last year. “I was hiding it from WWE, and at that time they weren’t drug testing for medication like they do now. I then broke my neck 2 more times over the next 2 years, and the bad relationship/marriage I was in made me feel more alone than ever. I decided that I could not handle the rigorous schedule of WWE and I felt guilty about being a liability to Vince McMahon. So I asked for my release and I swore I’d get my life together.”

Kurt Angle himself has said in recent interviews that he’d like to wrestle again, although he told The Sporting News on March 20th that wrestling for the WWE again isn’t something that has been set in stone yet.

“We haven’t talked about it but, I’m sure, in the back of their minds they’re thinking we’re going to release Kurt Angle on some of these talents in the future,” he said. “It’s not guaranteed and I have not talked to them about it at all. Seeing people like Sting and Goldberg come back to do some programs, it’s promising that Kurt Angle will get a shot.”

He also said in a recent Reddit Ask Me Anything that he’s been dying to get back to the WWE for years, but it’s the company that was wary of bringing him back.

“[T]hey wanted to see how I played out,” he said. “You know, they wanted to know if Kurt Angle really is who he says he is right now. Is he a recovering addict? Is he really drug-free? Is his neck healthy? There were a lot of questions going on I’m sure in Vince’s mind. You don’t think he wanted to bring Kurt Angle back? Of course, he did! It just wasn’t the right timing for it, until now. I would pass any drug test right now and I’m sure the WWE knows that.”

Already fans are beginning to speculate about who Kurt Angle might face in the ring, with one popular theory that he will go up against Triple H at SummerSlam. For now, we can see Kurt Angle perform as the general manager of Raw every week on the USA Network.

Read More
Pro Wrestling, WWE, WWE Raw
Kurt Angle is the new general manager of Monday Night Raw, but will he get back in the ring and wrestle again anytime soon?