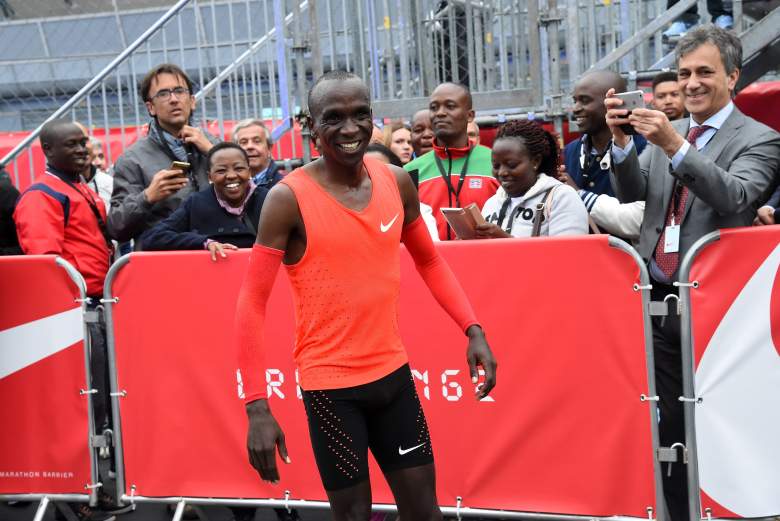 Eliud Kipchoge wanted see whether a long-sought after feat was possible: A marathon in less than two hours.

The 32-year-old from Kenya ran the fastest marathon ever recorded in Milan at a Nike-sponsored event called Breaking2. However, he came just short of the mythical two hours, clocking in at 2 hours and 25 seconds.

However, despite the astonishing speed the marathon won’t be “ratified” as the world record because of rules over pace setting, according to The New York Times.

Still, it was a remarkable feat, besting the 2:02:57 time set by another Kenyan, Dennis Kimetto, in Berlin in 2014, The Times reported. It was also part of a multi-million and multi-year Nike project to push the limits of human endurance in the marathon.

Eliud Kipchoge – 2:00:25
The barrier just got that much closer. #Breaking2 #JustDoIt pic.twitter.com/A9fb1wZt1X

A sub two-hour marathon has long been an endurance feat believed impossible, and Kipchoge came within seconds of shattering that conception.

He ran the marathon more than 2 and a half minutes faster than anyone else ever has, but the time won’t make the record books. The Guardian explains why: Kipchoge “was helped by a phalanx of 30 elite pacers, who subbed in and out of the race, which is against the official rules of the athletics governing body.”

Kipchoge vowed not to give up on the quest to run a marathon in less than two hours. “We are going up the tree… I have lifted a branch and I am going onto the next one. This is not the end of the attempt of runners on two hours,” he said, according to CBS News.

2. Kipchoge Wore Special Shoes Created by Nike & Some Have Criticized the Run as a Marketing Ploy 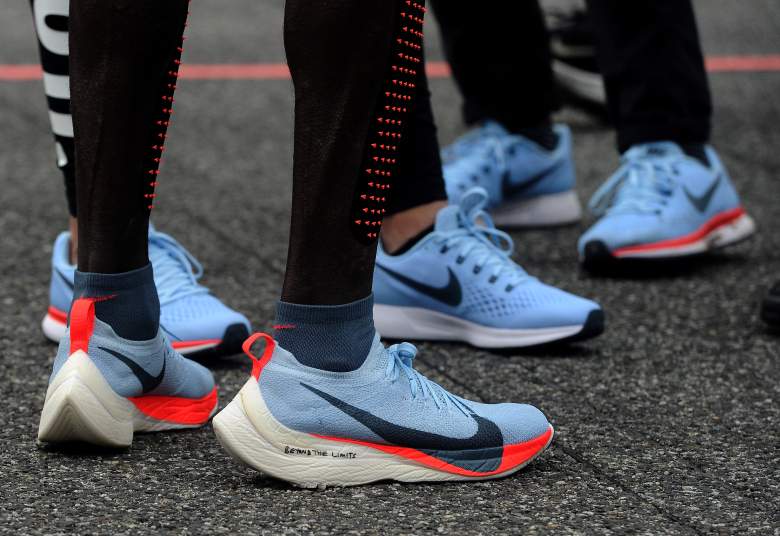 A detail of Eliud Kipchoge’ shoes during the Nike Breaking2: Sub-Two Marathon Attempt at Autodromo di Monza on May 6, 2017 in Monza, Italy. (Getty)

The Kipchoge marathon was a carefully orchestrated event scheduled as Nike plans to announce a new shoe line. That’s led some observers to criticize the marathon as more about showmanship than athletics, The Times reports.

Eliud Kipchoge – 2:00:25
The barrier just got that much closer. #Breaking2 #JustDoIt pic.twitter.com/uw9Dz1zknE

During the run, Kipchoge wore a Nike shoe called “Zoom Vaporfly Elite.” According to The Guardian, some have suggested the shoes “should be illegal because they contain a special curved plate that allows runners to ‘roll through’ instead of bending toes and losing energy.” The shoe has a “carbon fibre in-sole,” reports Sport360.

The race was planned for three years. Designers say the shoes “will make runners 4 percent more efficient,” according to CBS News.

According to Sport360, “60 athletes tested” for the Nike project. Lelisa Desisa and Zersenay Tadese were the other runners selected. 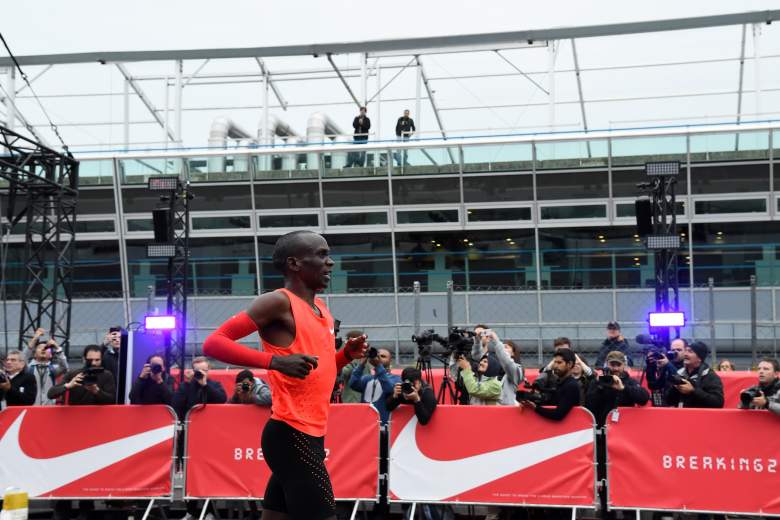 Eliud Kipchoge reacts at the end of the Nike Breaking2: Sub-Two Marathon Attempt at Autodromo di Monza on May 6, 2017 in Monza, Italy.(Getty)

Kipchoge’s diet during the marathon also violated the rules of big city events.

According to The Guardian, he drank “a new carbohydrate-rich sports drink, delivered by helpers on mopeds so he did not have to slow down.”

Back home in Kenya, reports Running World, he “consumes milk from cows that roam the fields near his camp and his meals center around rice or the Kenyan staple of ugali, with an occasional helping of beef.” He has touted the heart and mind as being as important as the body when running a marathon, according to Running World.

According to Etixx Sports, the day before a marathon, Kipchoge eats carbohydrates (rice, spaghetti or ugali) and no meat. The site describes Ugali as “a maize / cornmeal based staple which is high in carbohydrate and a popular dish in Kenya.”

The night before a marathon, Kipchoge drinks Etixx Carbo-Gy and eats and drinks tea and plain bread for breakfast and then drinks another bottle of Carbo-Gy three hours before the race. “During the marathon, I use the Triple Action Isotonic Gel and the Ginseng & Guarana Energy Gel. The day before the race, we prepare 8 drinks bottles – to cover every 5km of the marathon,” he told Etixx.

4. Kipchoge Runs 130 Miles Per Week as Part of His Training Regimen 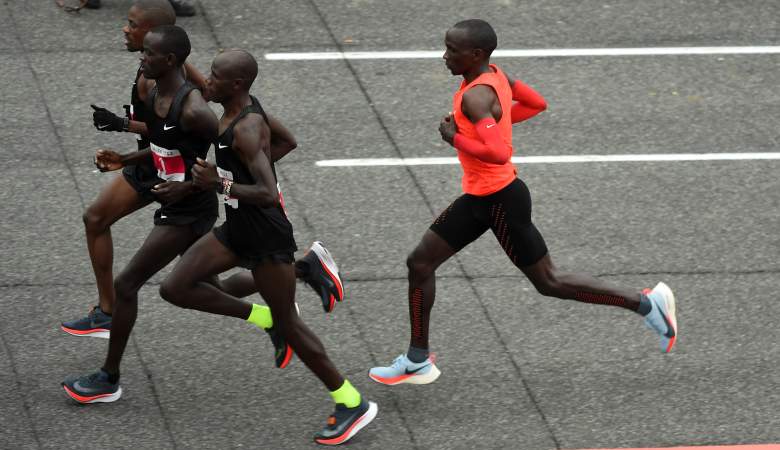 Eliud Kipchoge runs during the Nike Breaking2: Sub-Two Marathon Attempt at Autodromo di Monza on May 6, 2017 in Monza, Italy. (Getty)

Kipchoge trained for seven months for the Breaking2 marathon, according to The Guardian.

Kipchoge’s previous personal best marathon time was 2:03:05 at the London marathon, reported CBS, which adds that he is widely regarded as the world’s best marathon runner.

According to Running World, “His weekly staple is 13 hard three-minute repetitions with one minute steady between, part of about 130 miles per week he runs. Another favorite is a 20-mile run at a shade more than five minutes per mile, completed on terrain so undulating and in air so thin—at 8,000 feet—that most ordinary runners would gasp for oxygen on a gentle jog.”

Kipchoge keeps a training diary, The Telegraph reports. He has said that he considers “variety” important in training, likes runs up hilly terrain, and thinks “it is good to do short intervals (Kipchoge sometimes trains with 13 x 3-minute efforts) as well as long runs,” reports The Telegraph. The news site adds that he sometimes trains twice a day.

5. Kipchoge Leads a Simple Life Back Home in Kenya 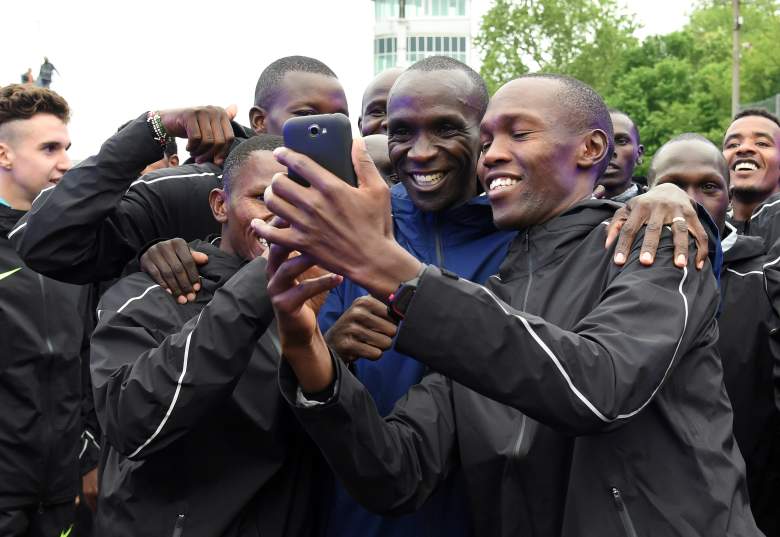 Back home in Kenya, where he is a running star, Kipchoge, an Olympian, lives what Running World calls a “simple life.” He listens to music and reads books to relax, most recently the 7 Habits of Highly Effective People by Dr Stephen Covey, the Telegraph reports.

He ran to school growing up.

He rises at 5:50 a.m., in the town of Kaptagat, and runs. According to Running World, he goes to sleep by 9 p.m. and takes an hour-long nap each day. Kipchoge is 5-foot-6, 115-pound, and was raised in a farming lifestyle, reports Running World.

Kipchoge is a “self-made millionaire,” reports Running World of his net worth. He’s won major marathons in major marathon wins in Chicago, London, and Berlin, according to the magazine.