Jessica Mendoza, a member of ESPN‘s Sunday Night Baseball broadcast team and a former softball player, is married to Adam Burks. The couple has two sons, 6-year-old Caleb Ashton Burks and 2-year-old Caden Adam Burks. Burks and Mendoza have been married since 2006.

Burks is a former athlete himself, playing multiple sports in school. He is also a U.S. Marines veteran, having served in Desert Storm.

1. They Met at a Southern California Wedding in 2004

Burks and Mendoza met in 2004, the same year she helped the American softball team win gold at the Athens Summer Olympics. The couple met at a wedding in Southern California that year.

“We met at a wedding in Southern California where we live,” Burks told the Spokane Spokesman-Review in 2008. ““I met Jessica in the 2004 Olympic year. We hit it off from there, and it blossomed… Life has a funny way of working out.”

Burks and Mendoza had a long-distance relationship while Mendoza continued her softball career. But Burks sealed the deal with a scrapbook for Mendoza when she returned from Athens. “He’s not really the guy who [usually] makes scrapbooks, I’ve come to learn,” Mendoza told the New York Post in 2016.

Mendoza retired from playing in 2010, after the national team won silver at the 2008 Beijing Summer Olympics. She is a Stanford University graduate. She has an estimated net worth of $2 million, Celebrity Net Worth estimates.

As Burks notes on his Facebook page, he is originally from Spokane. He graduated from University High School in 1987.

2. Burks Is a Former Civil Engineer & Is Now a Stay-at-Home Dad

Burks, who graduated from Eastern Washington University, worked as a civil engineer. Two months after their first son was born in 2009 though, he became a stay-at-home dad. At first, thins was because Mendoza was playing softball professionally. Today, it’s because she’s traveling the country constantly to cover baseball for ESPN. At first, Mendoza didn’t think this arrangement would work.

“We’re a role-reversal family in every way possible,” Mendoza told the New York Post. “And I love that our country has evolved to that. It doesn’t matter who makes money, as long as something is rolling in and you’re happy.”

3. He Is a Veteran of Desert Storm & Served With the Marines

Burks is a former U.S. Marine and served in Operation Desert Storm in Iraq, notes the Spokesman-Review.

Before becoming a stay-at-home dad, Burks worked for the City of Moorpark, California. According to a Los Angeles Daily News profile, Mendoza’s parents live in nearby Camarillo and help Burks out when it comes to taking care of their boys.

“I know I wouldn’t be in this position with work (without this arrangement), because I’ve been able to say yes to so many opportunities,” Mendoza told the Los Angeles Daily News. “If I were with the boys 24 hours a day, it might feel more routine. I appreciate them every day, having a moment to love on each other. And it’s awesome for me to know that if I’m gone, they’re with their dad, and there is such a bond they have that I don’t think would be there if he was still working the hours that he once did.”

4. He Isn’t the Only Link Mendoza Has to the Military, Since Her Father Also Served

It's happening! Got my hubs to the #NFL #HOF to see his FAVORITE #BrettFavre get inducted! He is like a little kid he is so excited!! #mancrush #Packers #wifeoftheyearaward

In July 2016, Mendoza told The Fayetteville Observer that Burks isn’t the only connection she has to the military. Her father, Gil, served in the Army.

“He was there when they built the wall between East and West Berlin,” Mendoza told the Observer. “Especially with him being from Mexico, for him to get that world experience at such a young age that I don’t think he would have gotten otherwise and then sharing it with us. I think it influenced him to show us the world and educate us on what it means to serve in the military.”

She also told the Observer that her husband has shared stories of his own service.

“He’s talked about, mentally, what he was thinking about and how ready he was to be in combat and do whatever they were positioned to do,” Mendoza said in 2016.

Last year, Mendoza was in the broadcast booth for the Braves-Marlins game at Fort Bragg.

There is nothing, nothing in the world that could make me as happy as these three. I am so in love… These boys have my heart The moments @mibellephotographers @michellebeller capture continues to amaze me. Blessed to have u in our lives!! ❤❤❤

Mendoza and Burke have two young sons. Caleb is 6 years old and Caden is 2 years old.

In a 2016 interview with the Los Angeles Daily News, Mendoza said Caleb is already taking after his mother.

“Oh, Caleb already looks and acts just like his mom,” Mendoza told the Daily News. “I laugh, and I sigh, because I know she’s going to have her hands full… But one of these days, this kid will be special just like she is.”

For Mother’s Day 2016, Mendoza couldn’t be home with her children. Instead, she was in New York for ESPN’s coverage of a Red Sox-Yankees game. She was in her first full season as an analyst for ESPN’s Sunday Night Baseball. 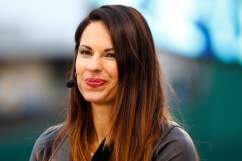 Who Is Jessica Mendoza’s Husband?