Zaza got his foot under Kawhi again pic.twitter.com/2KXlSGinC6

Kawhi Leonard is out per Pop.

Leonard — who sat out Game 2 and 3 — was forced from his team’s Game 1 Western Conference Finals loss on May 14 after spraining his left ankle in the third quarter. The injury occurred when he landed on the foot of Golden State Warrior’s center Zaza Pachulia after pulling up for a jump shot.

A foul was called on the play and Leonard was able to hit both free throws but was immediately taken out of the game afterward and did not return.

A few minutes prior to the incident with Pachulia, Leonard came down awkwardly near his own bench after drilling a three. Leonard was seen limping and called out of the game.

Kawhi's back foot should not be pointing that direction, rolled it over pic.twitter.com/I4GaHrQx7R

There was suggestions on social media that Pachulia’s play was dirty, as it appeared he undercut Leonard purposely.

That is… questionable by Zaza

That was absolutely filthy from Pachulia.

Congratulations to Zaza Pachulia, who has now taken Kawhi out for the rest of the game and has thus fulfilled his purpose to the team.

No flagrant was called on the play but that didn’t stop ABC’s Jeff Van Gundy for calling for one:

According to the San Antonio Expres-News’ Mike Finger, Leonard didn’t feel Pachulia was out of line:

Kawhi told me he does not think the Zaza play was dirty. Said he was just contesting the shot.

Pachulia speaking to reporters after the game said, “I just did what I’m supposed to do: challenge the shot.”

“I hate anybody going down with an injury. I’m an athlete too, I know how he feels. I hope it’s nothing serious,” Pachulia added.

Zaza Pachulia says of those who though the slid under Kawhi Leonard on purpose: "That's really stupid." pic.twitter.com/dKugk02Gkg

Prior to exiting Game 1, Leonard had 26 points, 8 rebounds and 3 assists in 24 minutes played. The Spurs led 78-55 when Leonard was subbed out for Jonathan Simmons and taken back to the locker room. San Antonio was outscored 58-33 from that point on. 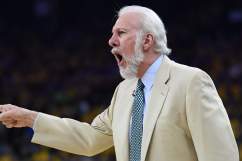