The moment of truth is about to arrive as the NBA lottery determines who will have the top pick of the 2017 NBA Draft.

Heavy explored the lottery teams earlier this week after we conducted a lottery simulation. We looked at what the lottery could look like if the Sixers won the lottery.

Now it is time to take a deeper look at the entire first round. At the top of the draft, Markelle Fultz and Lonzo Ball are the leading candidates to be the first pick. ESPN’s Chad Ford reported Fultz has a 57.2 percent chance to be the top pick based on the lottery teams he polled.

Ford later reported that some teams have De’Aaron Fox ranked ahead of Ball. The Kentucky guard outplayed Ball in both matchups this season but most recently in the NCAA tournament game where nearly every NBA team was in attendance. While Fox’s stock is high, it appears unlikely he could go any higher than No. 2.

While NBA teams are publicly saying the LaVar Ball circus surrounding his son will not impact whether they draft Ball, it certainly cannot help his stock. Magic Johnson spoke with ESPN about his thoughts on the elder Ball’s impact on his son’s draft status.

“No effect at all,” Johnson told ESPN. “I think what you’re drafting is the son and not the father. I think that you also are gauging and evaluating his son on his ability and what he can do not only on the basketball court but also what he can do for your team. How he can enhance and make your team better.”

Looking for a few players that helped themselves at the combine? Draft Express and Chad Ford both raved about Oregon big man Jordan Bell. In addition to Bell, Maryland’s Justin Jackson also had a solid week.

As expected, Florida big man Devin Robinson crushed the athletic testing at the combine. Robinson is an intriguing player who I had an opportunity to watch in person during the NCAA tournament. He does not always make the right play, but he never stops playing. With his athleticism, NBA teams at the end of the first round could be lining up to mold him into the NBA player they want him to be.

Keep it here for coverage of both the NBA Draft Lottery and the 2017 NBA Draft in one of the most anticipated draft classes in recent memory. Here’s a look at our latest first round mock draft. The order for the lottery teams is based on their odds to get the No. 1 pick. 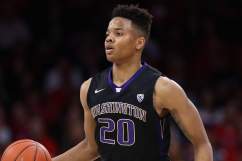