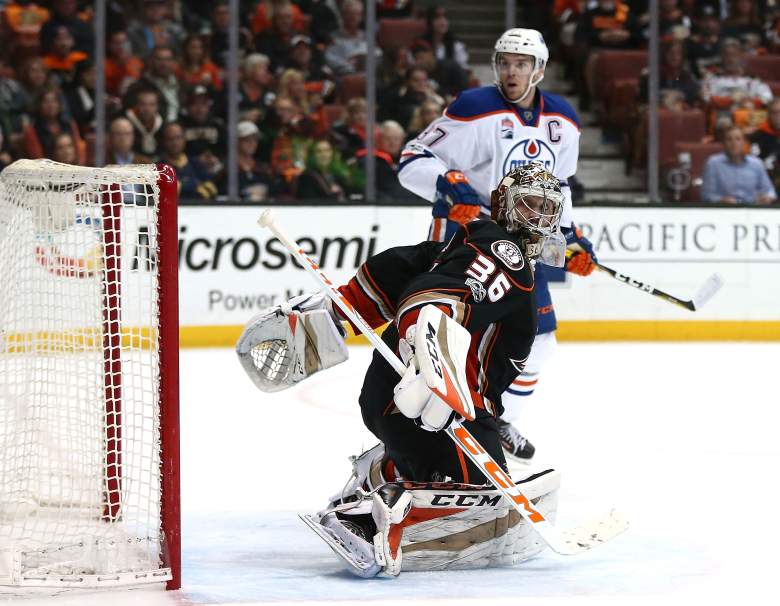 Goaltender John Gibson and the Anaheim Ducks are heading to the Western Conference Finals after defeating the Edmonton Oilers Wednesday night, 2-1. (Getty)

Click here for the full box score and read on for a recap and highlights.

The Anaheim Ducks moving on to the Western Conference Finals after conquering their Game 7 home ice demons and taking down the Edmonton Oilers on Wednesday night, 2-1.

Thanks to a Nick Ritchie 3rd period tally to break a 1-1 deadlock, the Ducks snapped a streak of losing a Game 7 at home in four straight postseasons and will now get set to take on the Nashville Predators on Friday in Anaheim.

After falling behind 1-0 early in the first, the Ducks controlled the tempo of the game — highlighted by a second period in which they outshot the Oilers 16-3.

The league’s leading scorer in the regular season and 2015 first overall pick Connor McDavid struggled in 24:45 of ice time, registering no points and only one shot on goal. His Oilers were looking for their first trip to the Conference Finals in over 10 years.

“I believe in this group. We’ll be back,” McDavid told reporters after the game.

Here are some of the key moments from Game 7:

Oilers & Drake Caggiula Get on the Board First After Anaheim Turnover

At 3:31 of the first period, the Ducks Shea Theodore fumbles the puck away in front of his own net and right there to capitalize was the forechecking Caggiula, poking it past Ducks goaltender John Gibson and giving the Oilers the early advantage.

Cam Talbot Leaves His Crease for the Pokecheck, Preserving the Early Lead

Shortly after the Oilers took a 1-0 lead, the Ducks Ondrej Kase sped past Edmonton’s Benoit Pouliot in the neutral zone to create a two-on-nothing rush for Anaheim but Edmonton goalie Cam Talbot had other ideas, diving head first to poke the puck away and safely into the corner.

Andrew Cogliano Knots the Score Midway Through the Second Period

The Ducks are rewarded for their strong second period play and 8:55 in Cogliano ties it up with help from Ryan Kesler and Brandon Montour. With Anaheim on the attack, Cogliano scooped the puck up from the side of the net and dished off to Montour at the point who threw the puck on goal where Kesler was camping out. Kesler took a backhand shot that deflected off Caggiula and right onto Cogliano’s stick, who re-directed it past the Oilers netminder.

And the save of the game goes to.. Kris Russell?! #EDMvsANA #StanleyCup #SXM91 pic.twitter.com/48JLPoLDkp

Shortly after Cogliano’s game-tying tally, the Ducks continued their relentless attack and were set to take the lead as Ducks forward Antoine Vermette — with the puck on his stick — had a seemingly wide open net. Russell was able to get over just in time and deflect the shot away, keeping the game even.

The Ducks opened up the third the same way they played most of the second — attacking — and Ritchie was able to beat Talbot at the 3:21 mark. The Orangeville, Ontario native scored his second goal of the postseason after receiving a pass in the slot from defenseman Sami Vatanen — who pinched in from the point. Ritchie pivoted and fired quickly, shooting the puck underneath Talbot’s right arm and into the back of the net.

For One of His 23 Saves, Gibson robs Leon Draisaitl Midway Through the Third to Keep the Game 2-1

Moments after Ritchie put the Ducks ahead, Gibson was forced into action — stopping a backhand attempt from Draisaitl that looked to be heading underneath his blocker and in for the tie.

The Oilers took the first two of the series in Anaheim, 5-3 and 2-1. The Ducks grabbed the next three contests — two of which were in Edmonton — 6-3, 4-3 (OT), and 4-3 (2OT). In Game 6, the Oilers blew a three goal lead with less than four minutes left in regulation, allowing the Ducks to force overtime and ultimately win the contest on a Corey Perry double-overtime goal. It was the first time in league history a team came back from three or more goals down with less than four minutes remaining to force overtime or win the game.