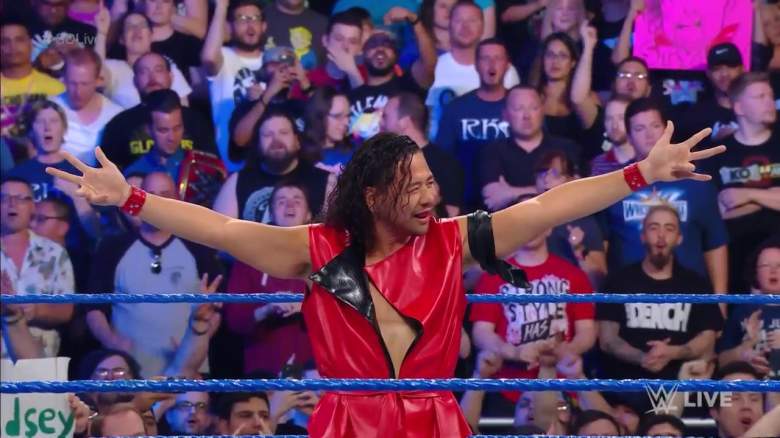 Shinsuke Nakamura, a wrestler who became famous in New Japan Pro Wrestling and joined the WWE in 2016, will make his in-ring debut on the WWE’s main roster at Backlash. Of all of the things that make Nakamura memorable, one is surely his theme song, which consistently inspires fans in arenas across the country to sing along. So what is that song that plays when Nakamura enters, and how did it come to be associated with him?

Shinsuke Nakamura’s theme song is called “The Rising Sun,” and it’s written by CFO$, the songwriting duo made up of John Paul Alicastro and Michael Conrad Lauri. They write a lot of the WWE’s themes, and “The Rising Sun” was made specifically for Nakamura to use in the ring.

Of course, the most famous part of the song is the violin tune, which is what everyone in WWE audiences typically sings along to. This was actually added in by Earl Maneein, a New York City based violinist. John Paul Alicastro and Michael Conrad Lauri told WWE.com that as they were putting together the song, they felt it was missing just one last piece, and that piece was all Meneein’s doing.

“It gave it this beautiful human feeling that you couldn’t get with what we were doing,” Alicastro said of Maneein’s violin contribution.

In a WWE video, they note that it sort of sounds like Meneein is playing an electric guitar, but that is not the case.

“As you’ll notice, it sounds like he’s playing an electric guitar, but that’s really a violin, and that style just absolutely took the song to another level for us,” Michael Conrad Lauri told WWE.com.

So what about Nakamura inspired them to write this song? Well, they told WWE.com that he is “flamboyant and chaotic, but graceful,” and they wanted the song to capture that feeling. In addition, they wanted to capture the feeling of a Japanese video game.

“One thing that inspired us was the feel of Japanese video game music,” Alicastro said. “We grew up on The Legend of Zelda, Final Fantasy and Metal Gear Solid. Their soundtracks are brilliant. We wanted to achieve the epic feeling that they all have.”

Nakamura himself fully recognizes the importance of this theme on his act. When ESPN asked him how important the entrance theme is to his character, Nakamura laughed and said, “How important is it? Maybe 90 percent.”

However, Nakamura recalled that when he started hearing some early versions of the song, he actually wasn’t a fan.

This is likely because originally, Nakamura’s theme was the song that would later be used for Bobby Rhode’s entrance, according to the Wrestling Observer Newsletter.