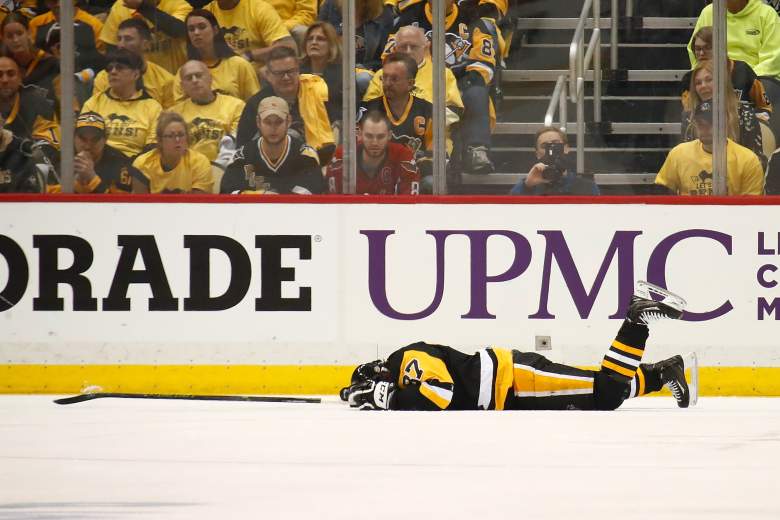 The Pittsburgh Penguins Sidney Crosby was cross-checked in the head by the Washington Capitals Matt Niskanen in the first period of Game 3 in their Eastern Conference Semi-Finals series. (Getty)

Pittsburgh Penguins center Sidney Crosby was injured on Monday night after receiving a cross-check to the head from Washington Capitals defenseman Matt Niskanen. He was diagnosed with a concussion and will miss at least the next game, according to head coach Mike Sullivan.

Crosby, who has had a history of concussions, skated off the ice slowly. His left leg appeared to bend in an awkward manner, as well.

Coach Sullivan: "Sid has been diagnosed with a concussion. He will be out for tomorrow's game. We will evaluate him from there." pic.twitter.com/9Gwph8UDPb

Sullivan on Crosby's mindset: "He's very upbeat and positive. We're very optimistic and hopeful we'll have him back in a timely fashion."

The incident took place in the first period of Game 3 of their Eastern Conference semi-finals series. Crosby was cutting to the net but then had his skate incidentally clipped by the Capitals Alex Ovechkin. As Crosby was falling to the ice, Niskanen hit him in the head.

Niskanen received a five minute major for cross-checking and a game misconduct. But, according to the Washington Post, he will not be suspended.

“It was an unfortunate play. I certainly didn’t mean to hurt him,” Niskanen told reporters after the Capitals defeated Pittsburgh, 3-2 in overtime.

The Capitals trail the Penguins 2-1 in the best-of-seven series.

WATCH the hit below:

Matt Niskanen 5+Game for a cross-check to the head of Sidney Crosby pic.twitter.com/MIKtrrwYbk

another angle. left knee is a nightmare pic.twitter.com/jod0SC3lcv

Read More
NHL, Sidney Crosby
Pittsburgh Penguins superstar Sidney Crosby has been diagnosed with a concussion after receiving a cross-check to head from Washington Capitals defenseman Matt Niskanen in Game 3 of their Eastern Conference semi-finals series.