It may have just been a nonchalant way of pointing out her husband suffers injuries just like any other NFL player, but what Gisele Bundchen told CBS This Morning’s Charlie Rose on Wednesday could land Tom Brady’s New England Patriots in a bit of trouble.

“He had a concussion last year. He had pretty much concussions every, I mean we don’t talk about, but he does have concussions,” Bundchen said when asked about Brady’s playing future.

However, Brady only appeared on the Patriots’ weekly injury report at the tail end of the season for a thigh injury. The NFL policy on reporting injuries reads in part:

It is NFL policy that information for dissemination to the public on all injured players be reported in a satisfactory manner by clubs to the league office, the opposing team, local and national media, and broadcast partners each game week of the regular season and postseason…

It goes on to say, “Violations may result in Commissioner discipline, which may include a fine on the club, fines or suspensions of individuals, as well as the possible forfeiture of draft choices.” New England has been no stranger to forfeiting draft picks for violating league rules — see Deflategate and/or Spygate. 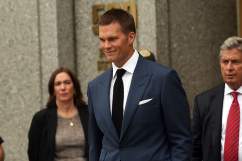 We have reviewed all reports relating to Tom Brady from the unaffiliated neurotrauma consultants and certified athletic trainer spotters who worked at Patriots’ home and away 2016 season games as well as club injury reports that were sent to the league office.

There are no records that indicate that Mr. Brady suffered a head injury or concussion, or exhibited or complained of concussion symptoms. Today we have been in contact with the NFLPA and will work together to gather more information from the club’s medical staff and Mr. Brady. The health and safety of our players is our foremost priority and we want to ensure that all our players have and continue to receive the best care possible.

In 2014, two former Patriots — Brandon Spikes and Aqib Talib — accused New England of fiddling with their injury reports. Spikes claimed he was put on season-ending injured reserve with a knee injury in January of that year, when he said all he needed was “rest and rehab.” An agent for Spikes said the linebacker had every intention of playing throughout the playoffs.

ESPN reported that Spikes was put on IR because he was late to a team meeting.

Talib claimed he was listed on Patriots’ injury reports with a hip injury but he says he had a quad injury.

“The Patriots have their way of reporting stuff, but I haven’t had a hip problem since Tampa,” Talib said in 2014.

New England has yet to comment on the revelation by Bundchen:

Patriots have no immediate comment on Gisele Bundchen's concussion-related comments on CBS about her husband Tom Brady.

Brady, 39, indicated recently he’d like to play into his mid-40’s, according to owner Bob Kraft. The league’s two-time MVP is coming off his fifth Super Bowl title, having led his Patriots to an unforgettable comeback win over the Atlanta Falcons.