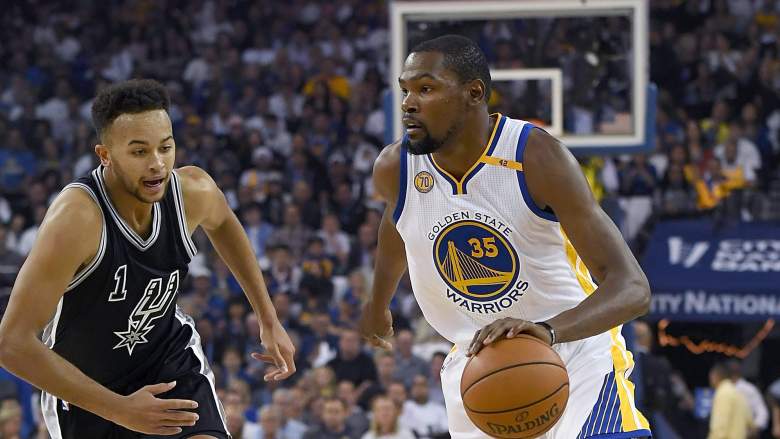 No Kawhi Leonard, no problem.

Despite playing without their MVP candidate, the San Antonio Spurs made easy work of the Houston Rockets on Thursday night, wrapping up their second-round series and booking a spot with the Golden State Warriors in the Western Conference Finals.

Here’s a look at the schedule:

These team played three times during the season, though those games probably aren’t the best indicators of what to expect over the next two weeks.

In the first matchup, the Spurs went into Oracle and embarrassed the Warriors, 129-100, on opening night. But that was nearly seven months ago, it was Kevin Durant’s first game with the Warriors, and Golden State wasn’t fully in sync yet.

The second matchup was another Spurs win, but that was a mere battle of depth. Steph Curry, Klay Thompson, Durant, Draymond Green, Andre Iguodala, Kawhi Leonard and LaMarcus Aldridge all sat that game out.

A third meeting on March 29 saw the Warriors fall behind 15-0 and 29-7 but ultimately come back and pull out the 110-98 victory. That game was also played without Durant, while Leonard was an uncharacteristic 7-of-20 from the field with 19 points and five turnovers.

All blowouts, but all with fairly unusual circumstances. This series, which will send either Golden State or San Antonio to the finals for the fifth straight year, should be much more entertaining.

No one is going to out-talent the Warriors, but the Spurs–as we’ve seen countless times during the Gregg Popovich Era–are the team best capable of consistently overcoming that hurdle with unrivaled game-planning and execution.

This year’s playoffs, at times, have been a bit dull, but this should as the perfect remedy.

Read More
Golden State Warriors, NBA, San Antonio Spurs
The Warriors and Spurs will meet for a spot in the NBA Finals. Here's an early look at everything you need to know about the ultimate Western Conference battle.