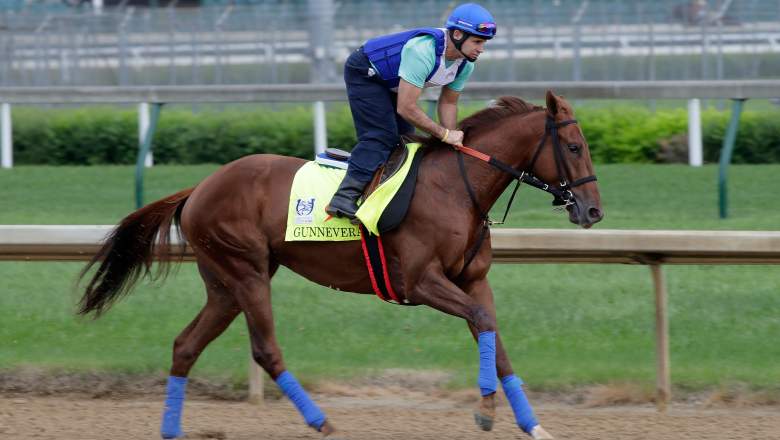 Gunnevera runs on the track during the morning training for the Kentucky Derby at Churchill Downs on April 30, 2017 in Louisville, Kentucky. (Getty)

The 143rd Kentucky Derby will take place on Saturday, May 6, 2017, at 6:34pm Eastern Time. The race will only last about two minutes, so make sure you don’t miss it.

TV coverage of the event will take place from 2:30-7:20pm ET on NBC, and will air live from Churchill Downs in Louisville, Kentucky. To find out what channel NBC is for your cable/satellite system, click here.

The tradition of the Kentucky Derby dates back to 1875, making it the longest-running sporting event in the United States. Often referred to as the “Most Exciting Two Minutes in Sports”, the Derby has its roots with Meriweather Lewis Clark, who was inspired by the Epsom Derby in England to create a similar racing spectacle in America.

According to Forbes, projections for this year’s race will likely break the all-time high of $194.3 million, set in 2015.

This year’s derby comes with a $2 million guaranteed purse, and as of now, it seems like it’s anyone’s game. Trainer Dale Romans recently told the LA Times, “I think it’s as wide open as we’ve seen in a long time… I think you’re going to have some big odds on whoever the favorite is. I think you’ve got McCraken. I think You’ve got Always Dreaming. And, of course, Classic Empire. … I mean it could be any horse in this race.” As it stands, Classic Empire is the favorite to take home the prize, followed by Always Dreaming and Irish War Cry.

The derby comes with many traditions, like sipping the race’s traditional beverage, a mint julep, at the grounds, and offering a blanket of 564 roses to the winning horse. And the large, ornate hats worn by women at the derby certainly don’t go unnoticed. Ronnie Dreistadt, a curator of education at the Kentucky Derby Museum, tells US News, “It really goes back to England, and the Kentucky Derby was patterned after a race in England, the Epsom…”

As always, many celebrities will attend the event. This year, several New England Patriots are expected to make an appearance, including Tom Brady, Rob Gronkowski, Julian Edelman, and Danny Amendola. Larry David, Tracy Morgan, Katie Couric, Kid Rock, and Harry Connick Jr. will also be cheering on their favorite horses.

Read More
Horse Racing, Kentucky Derby
When is the 2017 Kentucky Derby? Get the details on when the horse race starts and where you can watch coverage of the event.