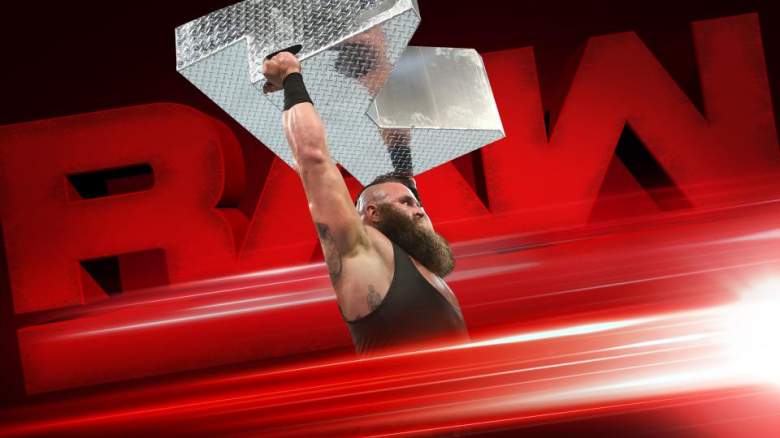 A new episode of Monday Night Raw just wrapped up on the USA Network. Here’s what happened:

10:32 – Backstage, Goldust and R. Truth tell Kurt Angle that they want to challenge the Hardy Boyz for the Tag Team Championship. Angle says that their win/loss record just isn’t good enough. Goldust says that they’ll do whatever it takes to prove themselves. Angle gives in and decides that there will be a Tag Team Turmoil match next week, and the winner will become the number one contenders for the Raw Tag Team Championship.

10:26 – Backstage, Dean Ambrose asks Finn Balor if he’s nervous, and Balor says he’s not. Ambrose hands Balor a donut, saying, “For the love of God, man, eat a carb.” Balor takes a bite and walks away. Just before the segment ends, The Drifter walks by.

10:09 – Backstage, Dean Ambrose interviews Seth Rollins, who says that he will become the number one contender tonight and go on to beat Dean Ambrose.

9:56 – Kurt Angle enters. He says that the match between Roman Reigns and Braun Strowman at Payback was the most physical he’s ever seen. But a match like that has consequences: Angle said that Roman Reigns reinjured his ribs, and Braun injured his rotator cuff. Angle is interrupted by the entrance of Bray Wyatt.

Wyatt introduces himself to Angle, adding that he’s here tonight as a savior. He asks Kurt Angle if he will walk by his side or stand in his way. Angle says he doesn’t know what Wyatt has planned, but Angle says that this is his show.

9:40 – Backstage, The Miz is speaking with Charly Caruso about how he’s preparing for the match. The camera pans to the right, and when it pans back to the left, Dean Ambrose is standing holding the microphone in place of Charly. The Miz leaves.

9:32 – Sheamus and Cesaro enter. Sheamus says that it feels so good to finally be set free; he’s never really liked the WWE universe, and they never really liked him, always preferring Cesaro. Sheamus also expresses frustration with the fact that the Hardys came in earlier this month and stole their thunder, saying that the audience would rather look to the past than appreciate a new tag team like them. Cesaro agrees, saying that the Hardys are a novelty act and nothing more. They conclude by saying they are going to take back the Raw Tag Team Championship.

The Hardy Boyz enter. Matt says that he and Jeff are still hurting from last night’s post-match ambush. The Hardys run to the ring, ready for action, but Cesaro and Sheamus retreat.

8:52 – Seth Rollins enters. He says that for the first time in a long time, he’s feeling really good. He took out Triple H and Samoa Joe, and so now, he only has one thing left to do: he wants The Beast, Brock Lesnar.

Finn Balor enters. Balor says that he has a lot of respect for Rollins, especially after he beat Triple H at WrestleMania. But he says that he’s first in line to face Brock Lesnar, seeing as he never lost the Universal Championship.

Dean Ambrose enters. Ambrose says that Brock Lesnar does what he wants, when he wants. Seeing as Lesnar barely ever wrestles, Ambrose says that the Intercontinental Championship is the title everyone should be focused on.

The Miz enters. He says that Dean Ambrose is an embarrassment as a champion and that no one in this ring has earned a shot at it. If everyone deserves a shot at the title it’s him, The Miz says. Ambrose calls Kurt Angle up on the phone and proposes a match. Angle decides to make a triple threat match with The Miz vs. Seth Rollins vs. Finn Balor, with the winner becoming the number one contender for the Intercontinental Championship.

8:46 – TJ Perkins approaches Neville backstage. Perkins questions Neville, saying that it looked like he chickened out last night and nearly lost his title. Neville blames this all on the unprofessionalism of the referee. Neville also says that he can serve as a mentor to TJ Perkins, but only if he starts pulling his own weight; he can prove himself in a match against Austin Aries tonight.

8:33 – Enzo Amore and Big Cass enter and begin cutting a promo in the ring. Suddenly, they’re attacked from behind by Luke Gallows and Karl Anderson.

8:00 – The show opens with every member of the Raw women’s division standing in the ring, except for Alexa Bliss, who enters very dramatically with her championship. Alexa takes the microphone and says that the queen is dead, but long live Alexa Bliss, the one and only goddess of the WWE. She says that she deserves a coronation. She also personally thanks Mickie James and Sasha Banks before standing up on a platform in the middle of the ring. Bliss finally thanks Bayley, saying that she couldn’t have gotten to the top without stepping on Bayley. Bayley, fed up with Alexa, tips over the platform, and Alexa falls down onto the mat. All of the women begin to fight, and the show goes to commercial.