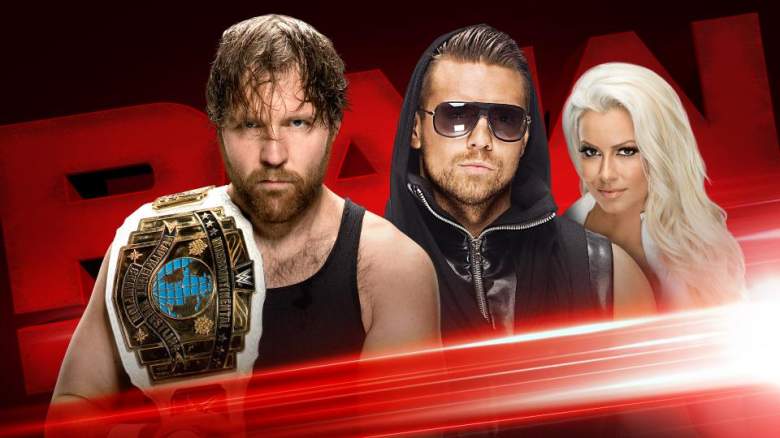 Dean Ambrose will fight The Miz tonight on ‘Raw.’ (WWE.com)

Monday Night Raw is currently airing a new episode live on the USA Network. Here’s what has happened so far:

10:47 – Backstage, Neville compliments TJ Perkins and says that the championship opportunity he desires is just around the corner. For now, they still have an Austin Aries problem, and so Neville says that he and Perkins must end Austin Aries once and for all tomorrow night.

10:41 – After the match ends, Enzo Amore tries to take a selfie with Titus O’Neil lying in the background, but he’s attacked by Apollo Crews.

10:39 – Big Cass defeats Titus O’Neil in a match that only lasts about a minute.

10:34 – Enzo and Cass enter and start doing their promo, but they’re interrupted by Titus O’Neil and Apollo Crews. Titus O’Neil mocks Enzo and Cass’ intro and says that New Jersey is disgusting. Titus seems to be under the impression that Apollo is facing Enzo tonight, but Big Cass says that instead, Titus himself will fight Big Cass. Titus doesn’t want to wrestle tonight because he’s wearing an expensive suit.

10:23 – In a backstage interview, Seth Rollins said that he slayed the king, so he’s more than capable of slaying the beast.

10:17 – After the match, Bray Wyatt says that this may be Roman Reigns’ yard, but it’s his world, and Wyatt says that he’s going to take out The Beast, Brock Lesnar. He also questions whether Seth Rollins has what it takes to slay The Beast.

9:47 – Backstage, Kurt Angle approaches Bayley and assures her that her match at Extreme Rules will be a straight up wrestling match. Bayley is annoyed by this; she says she wants her championship back and she’s ready to get extreme. Angle decides that Bayley’s match against Alexa Bliss will be a kendo-stick-on-a-pole match.

9:26 – The Miz complains to Kurt Angle in his office, outraged that Dean Ambrose intentionally got himself disqualified tonight. Angle gives The Miz an Intercontinental Championship match against Dean Ambrose at Extreme Rules, with a stipulation being that the title can change hands even in a disqualification. Suddenly The Drifter enters and starts to play the guitar, and the segment ends.

9:09 – Alexa Bliss enters. She says that Newark, New Jersey is the sweat gland of America, but tonight they will be graced by a real winner: her, Alexa Bliss.

Bayley enters. She says that she’s invoking her Women’s Championship rematch clause at Extreme Rules. Bliss mocks Bayley and suggests she’s not tough enough for an extreme rules match. She also tells Bayley to leave the championships to the adults.

Bayley attacks Alexa Bliss, and the two brawl. Alexa Bliss grabs a kendo stick and hits Bayley with it. The segment ends with Alexa Bliss’ music playing as Bayley lies in pain.

9:07 – In a backstage interview, Finn Balor says this may be Roman Reigns’ yard, but it’s Balor’s universe.

8:50 – The Miz defeats Dean Ambrose via disqualification after Dean Ambrose kicks The Miz below the belt. However, Ambrose retains the Intercontinental Championship.

8:09 – Roman Reigns enters. He says that we don’t need a fatal five-way match because he’s already the number one contender. Roman says that this is his yard, and he’s the only one around here who can beat Brock Lesnar.

Finn Balor enters. He says that he was the first Universal Champion and he never lost his title. Therefore, he’s first in line to get at Brock Lesnar.

Samoa Joe enters. He says that it’s all about results around here, and he has gotten results in his feud with Seth Rollins lately. Bray Wyatt enters and says he can feel the rest of them trembling in fear.

Seth Rollins enters. He says that they should all stop talking and have a match tonight. They all start brawling, and this ends with Finn Balor standing in the ring victorious.

8:00 – Kurt Angle enters. He says that last week, Braun Strowman suffered a shattered elbow and had surgery. This may take him out of action for up to six months, Angle says. So with Strowman gone, who will challenge Brock Lesnar for the Universal Championship? Angle says he’s given it a lot of thought, and he decided this title opportunity must be earned and not given. So at Extreme Rules, there will be an extreme rules fatal-five way match to determine the number one contender for the Universal Championship. Those competitors will be: Seth Rollins, Samoa Joe, Finn Balor, Bray Wyatt, and Roman Reigns.