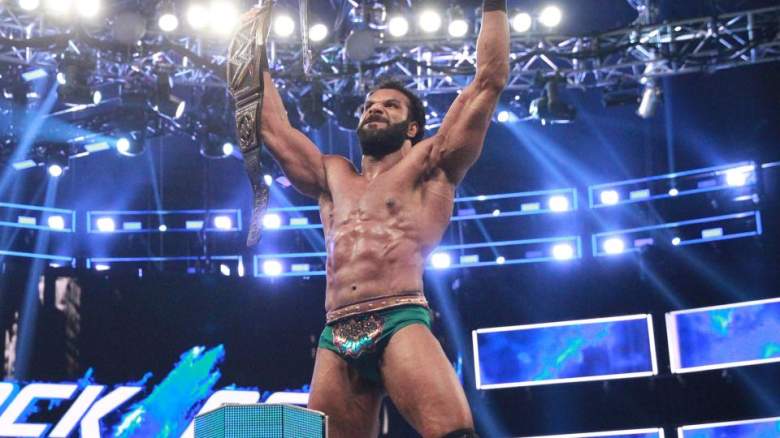 A new episode of SmackDown Live is currently airing live on the USA Network. Here’s what has happened so far:

9:28 – Backstage, Natalya enters Shane McMahon’s office and asks for a title opportunity. James Ellsworth and Carmella then enter and say that Carmella is the one who deserves a title shot. Becky Lynch enters, and she wants a title shot, too. Tamina enters, also wanting a title shot. Finally, Charlotte enters, and she says that the queen is waiting for her crown. Shane McMahon decides that next week, there will be a fatal five-way match between all of these women, with the winner going on to face Naomi at Money in the Bank.

9:16 – The Usos defeat Tyler Breeze and Fandango in a Tag Team Championship match.

9:10 – Tyler Breeze defeats Jey Uso in a very brief match after Fandango prays him with a squirt gun.

8:58 – Jinder Mahal enters, holding up his WWE World Championship. He says that 1.3 billion people are celebrating his victory in India tonight. He also says that the audience boos him because he looks different and talks different, and now they’re booing him because he exposed them for the fools that they are.

8:23 – Charlotte and Becky Lynch defeat Carmella and Natalya by submission. The match ends when Becky Lynch forces Carmella to tap out.

8:04 – Shane McMahon enters. He congratulates Jinder Mahal and says that in four weeks, at Money in the Bank, Randy Orton will have a rematch with Jinder Mahal. Then, Shane announces the participants in the Money in the Bank ladder match. They are AJ Styles, Baron Corbin, Sami Zayn, Dolph Ziggler, Shinsuke Nakamura, and Kevin Owens. Kevin Owens actually wasn’t announced as a participant, but he convinces Shane McMahon to add him.

Everyone argues for several minutes, especially Kevin Owens and Baron Corbin, who are at each other’s throats. Dolph Ziggler declares that he’s going to win the ladder match once again. Shinsuke Nakamura declares himself Mr. Money in the Bank.

Shane McMahon then books two matches for tonight: one between Baron Corbin and Sami Zayn, and a tag team match with Kevin Owens and Dolph Ziggler facing Shinsuke Nakamura and AJ Styles.

8:00 – The show opens with Jinder Mahal arriving to the arena in a limo as part of a motorcade. The camera pans in to him and he scowls.