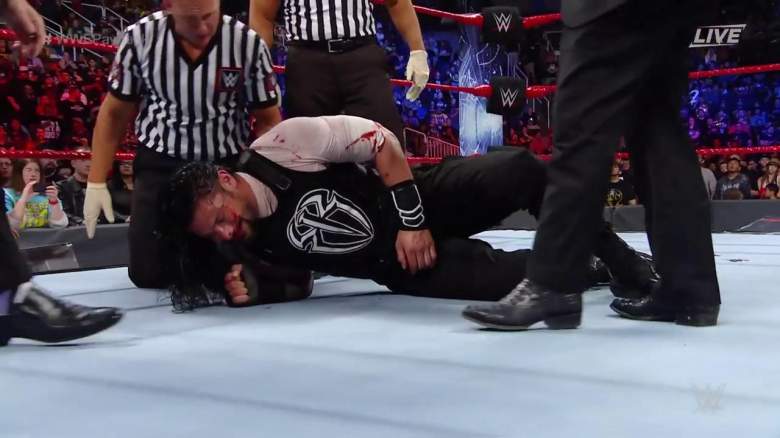 WWE fans left Payback last night under the impression that Roman Reigns would likely be taken off of WWE television for a brief hiatus, and on Raw this week, fans got an update on Reigns’ status.

About two hours into the Raw broadcast tonight, Kurt Angle entered, and he informed viewers that Roman Reigns re-injured his ribs and suffered from numerous other internal injuries during his match against Braun Strowman last night.

Angle also said that Strowman himself was hurt during the main event, tearing his rotator cuff. Obviously, neither of these men was legitimately injured at Payback, and this is simply a storytelling device meant to explain their absence.

The last time Roman Reigns was “injured” following a Strowman encounter, he was kept off of WWE television for a few weeks, and based on what Angle said tonight, it sounds like that will happen again, and Roman will not be seen on Raw for a while.

There are a number of reasons why the WWE might want to give Roman Reigns a break. One reason is that the long-term plan is reportedly for Roman Reigns to face Brock Lesnar in the main event of WrestleMania 34 next year, but the company must stall a bit if they want to put that off until 2018.

It has already been announced that Great Balls of Fire in July will be Brock Lesnar’s first time defending his Universal Championship. It appears that this match will be against Braun Strowman. Therefore, what seems quite likely is that Roman Reigns will interfere in this Brock Lesnar match, with Great Balls of Fire perhaps marking his return.

Another reason to give Roman a break is to let fans cool off a bit following their post-WrestleMania hatred for the man who retired The Undertaker. That already seems to be working, as the crowd at Payback was noticeably less hostile towards Reigns than crowds in recent weeks have been. Then again, they did chant “You deserve it!” at Roman as he coughed up blood.

Stay tuned for more information regarding the future of Roman Reigns on Monday Night Raw.