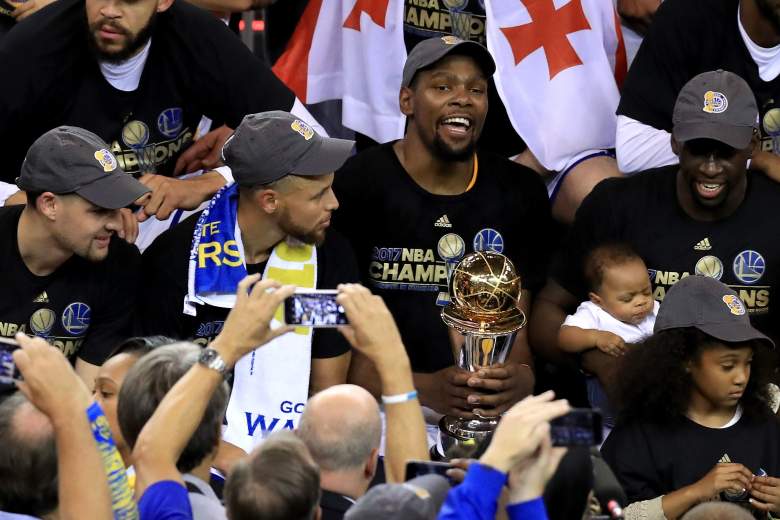 Will the Golden State Warriors visit the White House? (Getty)

The Golden State Warriors — fresh off winning their second championship in three years — have not been invited to the White House, according to a team spokesman.

“We have not been invited to the White House.  Today is about celebrating our championship. We will make those decisions when and if needed,” a team spokesman wrote in an email Tuesday morning.

Official statement from the Warriors pic.twitter.com/59PmJ9IflX

Unsubstantiated reports surfaced this morning that the team held a vote and unanimously decided not to visit the White House as is customary for champions of the major sports to do. Those reports were based off a tweet from CNBC finance reporter Josh Brown:

The White House didn’t immediately respond to a request for comment.

Back in February, after the New England Patriots defeated the Atlanta Falcons in Super Bowl LI, President Trump offered this tweet of congratulations:

As of early Tuesday afternoon, no tweet has been offered for the Golden State Warriors.

Last year, when the Cleveland Cavaliers won the championship, President Obama extended his congratulations via Twitter shortly after Game 7 concluded:

What a game and what a series for the @Cavs. Happy to see @KingJames bring it home for Cleveland!

When @POTUS calls, you answer.

Watch as Coach Lue receives a ring from the @Whitehouse.https://t.co/m9xkCRCBqf

Joe Lacob, owner of the Golden State Warriors, said on ESPN’s First Take this morning when asked about a potential visit to President Trump, “We’ll worry about that when the time comes.”

It’s entirely possible that if invited, some members of the team wouldn’t go as evidenced by past comments made by members of their organization.

In a May interview with Sports Illustrated, head coach Steve Kerr called Mr. Trump “ill-suited” to be president and a “blowhard.”

“Has anyone ever thought that Donald Trump was a great leader?” Kerr asked.

Kerr, who lost his father a terrorist attack in Lebabon in 1984, said after Mr. Trump announced his travel ban, “If we’re trying to combat terrorism by banishing people from coming to the country, we’re really going against the spirit of what our country is about, and [we’re] creating fear. It’s the wrong way to go about it. If anything, we could be breeding anger and terror. I’m completely against what’s happening. It’s shocking. It’s a horrible idea.”

In February, UnderArmour CEO Kevin Plank called Mr. Trump a “real asset” to the nation. Warriors guard Steph Curry — who has a shoe deal with UnderArmour — responded with “I agree with that description… if you remove the ‘et'” from asset.”

Reserve forward David West said in January of Mr. Trump, “All the tactics he used to get elected are the very things that someone like me, who works with youth on a consistent basis, are the things we try to talk our young folks out of being.”