Hideki Matsuyama is a 25-year-old professional golfer who was born in Matsuyama, Ehime, Japan, who’s made deep runs in multiple PGA Tour events in his career. He turned professional in 2013 and attended Tohoku Fukushi University for college.

Matsuyama’s first appearance at any PGA Tour major event came in 2011 when he competed in the Masters Tournament, where he was the first Japanese amateur to even compete in the event. He finished T27 in the event with a score of one-under par. Since he was the lowest scoring amateur at the event, he won the Silver Cup. He was also the only amateur in the field to make the cut.

1. Matsuyama is Searching for His First Major

While the former No. 1 player in the World Amateur Golf Rankings has put together some strong finishes at PGA Tour major events, he has yet to win one. Of his best finishes in major events, he’s finished as high as T4 at the PGA Championship in 2016, T6 in the 2013 Open Championship, T10 at the 2013 U.S. Open and 5th at the 2015 Masters Tournament.

To go along with that, his impressive 2016 campaign also featured a 7th place finish at the Masters. He also finished in 18th place at both the U.S. Open and Open Championship in 2015. His current deep run in the 2017 U.S. Open has him pushing toward his first-ever major, and defeating an elite field at a tough course in Erin Hills would certainly be a way to win your first.

Matsuyama’s most recent victory on the PGA Tour came at the Waste Management Phoenix Open in March of 2017. Before that it was the 2016 World Golf Championships-HSBC Championship in October of 2016. His dominance at the Waste Management Phoenix Open is apparent, as he also won the event in February of 2016. Both of his victories at that event featured playoffs, with the 2016 win coming over Rickie Fowler and the 2017 win over Webb Simpson.

His other, and first-ever PGA Tour victory was back in 2014 when he won yet another playoff. This time it was at the Memorial Tournament in June, defeating Kevin Na.

3. He Has Won Eight Times on the Japan Golf Tour

While Matsuyama was an amateur during his first Japan Golf Tour victory at the Mitsui Sumitomo Visa Taiheiyo Masters in November of 2011, it resulted in him dominating through 2013 less than a year and a half later. From there, Matsuyama won four events at the Japan Golf Tour in 2013, another one in 2014 and finally two more in 2016.

His biggest margin of victory at the Japan Golf Tour came in his final victory, which was also at the Mitsui Sumitomo Visa Taiheiyo Masters, where he went 23-under par and won by seven strokes.

4. He Also Has a Victory at the Hero World Challenge

Matsuyama’s victory in 2016 at the Hero World Challenge led to PGA Tour’s Ben Everill state that the then-FedExCup leader was continuing to “lay claim to being the greatest golfing prospect Japan has ever produced.”

Not only did he win the event, but he took it by two strokes (18-under) while defeating some of the best players in the world. Behind him on that leaderboard featured Henrik Stenson at 16-under, Matt Kuchar, Rickie Fowler and Dustin Johnson all at 13-under and Bubba Watson, Jordan Spieth and Brandt Snedeker all at 11-under.

Hideki Matsuyama is the first player ever from Japan to win 4 times on the PGA Tour.

As Kyle Porter of CBS Sports pointed out, Matsuyama’s victory at the Waste Management Phoenix Open in 2017 was enough to make him Japan’s all-time PGA Tour wins leader. He surpassed Shigeki Maruyama and did so while he was only 24 years old.

Matsuyama is only expected to continue to improve from here, and a win at the 2017 U.S. Open could wind up being his first major victory on the PGA Tour. But, if he falls short, there’s plenty of reason to believe that he’ll wind up taking home that title at some point sooner than later in his career. 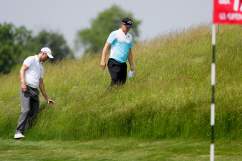