Jordan Spieth is widely considered as one of the best golfers in the entire world. He ranks No. 5 in the FedExCup rankings with 1,400 points, per the PGA Tour’s official site. The 23-year-old has played 13 events this season, tallying nine top-25 finishes, six top-10s, two third-place results, a second and one victory at the AT&T Pebble Beach Pro-Am.

Spieth’s already off to a solid start this year, but neither this year nor 2016 compare to what he was able to do back in 2015. That year he was No. 1 in the FedExCup rankings, hauled in a superb $12.03 million with five victories and 15 top-10 finishes in 25 events. He may be chasing those results this year, but he’s off to a strong start and will hope to use the 2017 U.S. Open as a springboard for another impressive year.

Overall, things have gone pretty well for Spieth throughout his early golf career. He seems to be close with his family and has a girlfriend in Annie Verret, who seems to be at events supporting him frequently.

Now, it’s time for Spieth and the rest of the golf world to turn their attention to the Open. So, here’s what you need to know about Spieth’s career at the U.S. Open, as well as his prospects at Erin Hills.

Speaking of 2015, it not only wound up to be a superb year for him, but it was also his lone victory at the U.S. Open. He completed rounds of 68-67-71-69, good for five under at the event. While his victory is what will be remembered most, it’s how he wound up winning the event that’s even more of an interesting scenario.

On the final hole at Chambers Bay, Dustin Johnson had an eagle putt to take home the championship and break Spieth’s heart. Not only did he miss the putt, but he also went on to miss a short birdie attempt that would have forced a playoff.

It was brutal for Johnson, but for Spieth it wound up being one of the biggest victories of his career, although he’s certainly had plenty more to write home about at this point. After watching how it all played out, Spieth summed it up with three simple words, per CSN Philadelphia.

2. Spieth Struggled During His Defense of That Title in 2016 at Oakmont

During the 2016 stretch, Spieth’s 9-over finish with rounds of 72-72-70-75 was a bit head-scratching, but there are things that must be factored in. First, the event had three major weather delays and his second round didn’t begin until two days after it was supposed to, as GolfChannel.com pointed out. Obviously, he wasn’t the only golfer to struggle due to this.

The weather can’t be all to blame, though, as he also hit just 28 of 56 fairways and 40 of 72 greens. He struggled in a few areas, but as Yahoo Sports points out, it was a four-putt, triple-bogey on the 194-yard, par-3 sixth hole that really wound up hurting him. After getting out of the bunker with his second shot on the hole, he missed a 16-foot putt and things just went downhill from there. The triple-bogey on the final round all but did in his chances of making a push in this event.

Finally, it’s also worth noting that FOX Sports ranked Oakmont as the No. 3 toughest U.S. Open course, and for good reason. Last year, aside from Dustin Johnson (-4), only three players finished under par, with two others at even par.

Jordan Spieth is an early favorite to take down the 2017 U.S. Open. (Getty)

Spieth enters the 2017 U.S. Open with one of the best odds to take down the title once again, even after his mediocre showing during the 2016 event. Interesting, he’s behind only two other players, one of which is the current defending champ in Dustin Johnson.

4. Although Spieth Struggled in 2016, He Still Was Impressive at Times

While Spieth may not have had his best showing at a major back in 2016, the scorecard and video proof shows that he still excelled at times. Spieth had multiple impressive drives, wedge shots and putts. While a few bogeys and double bogeys wound up costing him dearly, his third round at Oakmont was impressive.

Spieth finished that round at even par, even though he had a double bogey and two bogeys. He had a stretch of three-straight birdies on holes 11-13, as his scorecard on FOX Sports shows.

Round four was obviously his downfall, as he had only two birdies and shot five-over on his way to his T37 finish. The tremendous skillset he showed in the video above at the brutal course is an obvious reason why he’s one of the favorites to take down the 2017 event.

If history is any indication for the young star, he should not only make the cut at Erin Hills, but there’s an easy argument to be made that he’ll be right there in the mix during the weekend. Was 2013 just a fluke? Well, after seeing some struggles on the course last year in some rough weather conditions, the turnaround for 2017 should almost be expected. 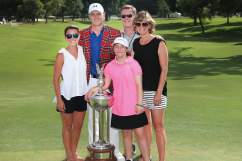 Jordan Spieth’s Girlfriend & Family: Meet the Team Behind the Star