There aren’t many, if any golfers, who can currently say that they are pushing one of the greatest players of all-time in Tiger Woods. While Jordan Spieth may not be on the level of Woods yet, and may never wind up getting there, he can say that he’s in the legend’s elite company in at least one way now. After Spieth’s victory at the Travelers Championship on Sunday, Rex Hoggard of GolfChannel.com pointed out that he is now just the second player in history to win 10 events before turning the age of 24.

Unfortunately, Spieth won’t be able to catch Tiger’s record of 15 victories, as he turns 24 on July 27, but even keeping somewhat close company with Woods is impressive in its own right. As Ryan Palmer, who is a regular practice round partner of the 23-year-old star stated, Spieth just has that “it factor” that you look for in a player.

“He has that it factor,” Palmer said. “You watch the moments, he goes through struggles and he fights back. Not many guys can hit that shot out of the bunker [on the 72nd hole]. It was gutsy. The shot out [during the playoff] was destiny.”

As stated above, it’s unfair to both Woods and Spieth to compare the two currently, but it’s wildly apparent the type of upside and potential that the latter has. At just 23 years old, Spieth could do the type of damage that Woods did after turning pro in 1996. While it took Spieth nearly four seasons to win his first major event after turning pro in 2012 (the 2015 U.S. Open and 2015 Masters), he’s actually just a bit behind Woods’ pace.

The 41-year-old took home the 1997 Masters and 1999 PGA Championship within his first four seasons but then went on a tear from 2000 to 2007 where he won 12 majors. In the two seasons after Spieth’s first three, he has yet to win another major, while Woods took home four, which is obviously the biggest difference.

As Ryan Lavner of GolfChannel.com pointed out earlier this year, Spieth doesn’t take any comparison to Woods lightly and called it an “honor.”

“I think less of [the comparisons] than I have in the past, but it’s an honor, it really is an honor,” Spieth said.

When Spieth is really on, he’s capable of being by far the best player in the world. But, the type of consistency that Woods showed throughout the early part of his career, and his career as a whole is pretty unreal. His 79 career PGA Tour victories are second behind only Sam Snead (82), while his 14 career majors wins are also second, behind Jack Nicklaus (18).

Finally, Woods has 186 top-10 finishes, 19 third place finishes and 29 second place finishes to go along with all of his other achievements. Spieth certainly has his work cut out for him, but at 23, the sky is truly the limit for him. 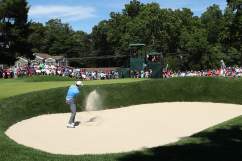 WATCH: Jordan Spieth Birdie From Bunker on 18 at Travelers