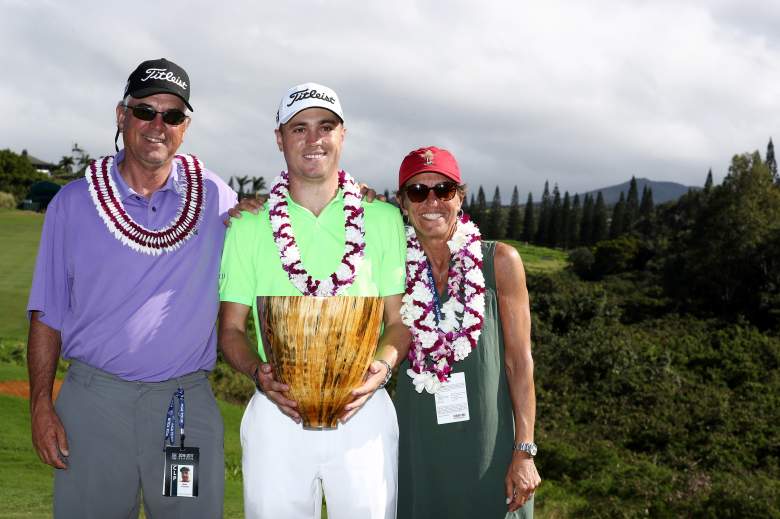 Justin Thomas with his father, Mike, and mother, Jani. (Getty)

A passion for golf runs deep in the Thomas family. Justin Thomas may be a top golfer, but he is not the only one with serious game.

Mike Thomas, Justin’s father, is a golf pro at a Kentucky course. Mike also has been involved with the PGA at a variety of levels including their attempts to help grow the sport. Justin’s grandfather, Paul Thomas, once played in the U.S. Open, and has competed in a variety of tournaments. Justin’s mother, Jani Thomas, loves watching Justin play so much she often travels to tournaments to be with her son.

Justin grew up on the golf course playing golf with his father and grandfather. Mike has admitted he tries to stay out of his son’s way, and is not always quick to offer advice.

Learn more about the Thomas family.

1. Justin’s Father, Mike, Is the Golf Pro at Harmony Landing in Kentucky

Having a father involved in golf has its advantages. According to PGATour.com, Mike is the head golf pro at Harmony Landing located in Goshen, Kentucky.

Mike admits that many of the members approach him wanting to hear stories about his son. Justin’s Alabama golf coach, Jay Seawell, has noted how much of an impact Mike has had on his son’s golf game.

“Mike gave him a … love of playing. He didn’t make him a lover of golf swings,” Seawell told PGATour.com. “Mike did a great job of making Justin love Nos. 1-18. He was always on the golf course, playing with his dad. I think the more you play, the more you value the score.”

2. His Mother, Jani, Gets Nervous Watching the Tournaments at Home & Often Travels With Justin

Happy bday to my momma @@janibjustin! Lucky to have her helping me in my busy life, don't know what I'd do without her #muchlove

Justin’s mother has become his travel buddy. On a recent blog with Golf Digest, Justin noted his mother is not a big fan of watching the leaderboard at home.

“…She hates following on-line, so she travels with me a lot. She’ll even come to dinner with me and some of the other guys,” Justin wrote in Golf Digest.

Between his dad’s golf advice and his mom keeping him calm on the road, Justin’s parents help him perform at his best.

3. Justin’s Grandfather, Paul, Played in the U.S. Open & Was Once Paired With Arnold Palmer at a Champions Tour Event

A little #tbt I found fitting for this week.. One of my favorite pics my dad has. My grandpa playing with the one and only #arnoldpalmer in an event back in the day. Hate @apinv didn't work for my schedule this year, great event ran by a great man! #theking #arnie

There was a time when Justin’s grandfather, Paul, was the best golfer in the family. Justin may have that honor now, but his grandpa was quite the golfer in his prime. According to PGATour.com, he played in the 1962 U.S. Open, and placed 15th at the 1983 U.S. Senior Open.

Justin’s grandfather was modest when asked about his impact on Justin’s rise in golf.

“His dad nor I really pushed [Justin],” Paul told PGATour.com. “We more or less answered questions. I would say the most help I ever gave him was playing with him and talking to him. His dad is his only teacher, and that’s the way it should be.”

She loves the playoff stache… Ok maybe not ??

Justin and Jillian have been seen at several public events including the 2017 Kentucky Derby. Justin posted the above photo while the couple was in Boston together.

A once single Justin admitted to Golf Digest that his status as a pro golfer has helped his dating life.

“Thomas says the increased attention he’s receiving from the ladies now that he’s playing for pay is at an 8 on a scale of 1-10. Although Thomas, 22, says he’s still single, he gives a grin and a ‘yeah’ when asked if ‘he’s doing well’,” Golf Digest writes.

5. Mike Has Been a Starter at the PGA Championship & Scorer at the Ryder Cup

Not a much better way to spend Easter.. 3 generations of Thomas' on the links! Happy Easter everybody

In addition to his golf pro duties, Mike is connected to many different aspects of the sport. He served on the PGA of America’s national board from 2008 to 2010. Through this position, he has been a starter at the PGA Championship, and scorer at the Ryder Cup. According to PGATour.com, he also represented the PGA in Wales at the 2010 Ryder Cup.

Mike was also part of the PGA President’s Council on Growing the Game from 2007-2010. Despite his decorated history within the sport, Mike insists his son was mostly self-taught.