Kevin Durant and Rihanna reportedly had a mini feud in Game 1. (Getty)

Aside from the Golden State Warriors rolling past the Cleveland Cavaliers in Game 1 of the NBA Finals, there was some real on-court drama that fans were locked into throughout the night.

It began in the second half of the game and, no, this didn’t involve LeBron James and Draymond Green, but instead, it was Kevin Durant and Rihanna.

Yes, the famous singer/songwriter was courtside at Game 1 of the series between these two juggernauts, and the drama seemingly began late in the 3rd quarter with the Warriors up by 15. Durant was at the free throw line, and someone, who was rumored to be Rihanna, yelled “Brick!” at the former MVP.

If there was any question that Durant heard the shout from (potentially) Rihanna, then this photo of him giving the staredown is pretty strong proof.

KD took notice and obviously wasn’t a fan of the trash talk.

But Was It Really Rihanna?

Here’s where it really begins to get interesting. It was almost a foregone conclusion that it had been Rihanna yelling at Durant, but ESPN posted this video which all but proved that it actually wasn’t.

In the video, it’s a flipped view of the free throw and you can clearly see that it’s the woman next to Rihanna who yells “Brick!” at Durant. Complex went on to verify that the woman who did yell at KD was apparently Rihanna’s personal assistant Jenn Rosales.

Apparently, it didn’t matter who it was, though, because late in the 4th quarter, Durant drained a 3-pointer and stared down the area where Rihanna and her assistant were sitting.

In the postgame presser, Durant was asked about the topic, which resulted in teammate Stephen Curry giving him an epic look in the process. Durant’s answer to the topic? “I don’t even remember that.” 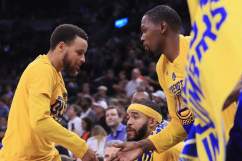