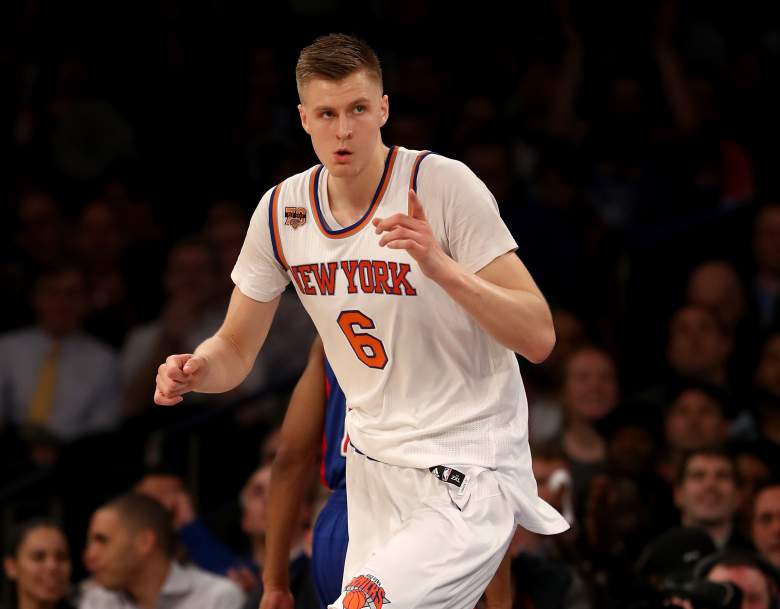 Kristaps Porzingis could be on the move from the Big Apple. (Getty)

Well, according to The Vertical’s Adrian Wojnarowski, team president Phil Jackson is mulling it over.

Knicks have gotten several calls from teams interested in trading for Kristaps Porzingis, per sources: https://t.co/MiSXkMYSqY

With the NBA Draft approaching on Thursday, insane rumors like this one tend to fly around but this is coming from the most credible of credible sources. That’s the scary thing if you’re a Knicks fan.

Wojnarowski goes on to say:

Sources: Phil Jackson met with Lauri Markkanen in New York on Monday, a player whom he's considering at No. 8 should Knicks move Porzingis. https://t.co/44d8EqMoBm

Markkanen, out of Arizona, has been compared favorably with Porzingis by some scouts if that makes you feel any better, but still

Again, these are just rumors and it’s still relatively hard to believe the Knicks would actually trade the 7’3″ Latvian. After being selected fourth overall in the 2015 NBA Draft, Porzingis has captured the hearts and imaginations of New York fans — dazzling the Garden crowd with DEEP threes, powerhouse dunks, and devastating blocks.

But Jackson does things his way and there’s legitimate reason to believe Jackson is upset with the way Porzingis handled the end of the season — skipping his exit meeting with team brass and heading back to his home country to play in the upcoming FIBA tournament.

The Vertical’s Chris Mannix says the Knicks asking price in any trade for Porzingis is astronomical:

Growing skepticism among some execs in contact w/New York that the Knicks are serious about a KP deal. Price described as extremely high.

Have heard same twice in last hour. NYK will talk KP, but demands are super high.
In other words: probably ok to chill at least a bit. https://t.co/iOlqOow7yG

Porzingis’ brother, Janis, spoke with Begley on Tuesday and said, “Despite how the Knicks are treating their players, Kris wants to stay in New York. He loves the city and he loves the fans and he wants to win with this team.”

No one from the Knicks organization has been in touch with Kristaps Porzingis since he skipped exit meetings, per league sources.

The Knicks are in a complete rebuild mode — having not made the playoffs since 2012-2013 and winning over 35 games just once in that span. Under the leadership of Phil Jackson for three full seasons, New York is a combined 80-166, good for a .325 winning percentage.

Jackson has made it no secret that he wants to trade superstar forward Carmelo Anthony — who Porzingis is known to be quite fond of. But the 33-year-old veteran has a full no-trade clause — something Jackson gave him when he resigned him in 2015 to a five-year, $124 million deal.

The Knicks — armed with the 8th overall pick in Thursday’s draft — could see trading Porzingis as a way to obtain another lottery pick and REALLY start over.

But again, Porzingis is just 21-years-old and loaded with potential. If you’re truly rebuilding, wouldn’t the “Unicorn” be the perfect cornerstone? Clearly, Phil Jackson isn’t so sure.