The wild NBA offseason is heating up quickly, and while we’ve seen many big players already linked to other teams in potential trades, another huge name can now be added to the mix. First, it was Paul George telling the Indiana Pacers he’ll be leaving town, preferably for the Los Angeles Lakers in 2018 free agency. This has led to the Lakers and Pacers engaging in trade talks surrounding the forward.

Now, it’s Cleveland Cavaliers star point guard Kyrie Irving who may be on the way out.

As the Chicago Sun-Times reported, Irving may push for a trade from the Cavaliers due to the potential of LeBron James leaving town next offseason.

All-Star Kyrie Irving has been contacting some of his former Team USA teammates and letting them know that he might be willing to push for a trade, especially if he feels the Cavs’ run could end quickly with James able to opt out after next season.

While there’s no concrete evidence that Irving would actually make the move, he has to be feeling a bit on edge at the moment. As The Ringer’s Kevin O’Connor reported, James may be interested in heading to either the Los Angeles Lakers or Los Angeles Clippers in 2018, and those rumors have only seemingly picked up steam as of late.

On Monday, the Cavaliers opted to part ways with general manager David Griffin, a move which James certainly didn’t seem pleased with. He took to Twitter to post about it:

If no one appreciated you Griff I did, and hopefully all the people of Cleveland! Thanks for what u did for the team for 3 yrs! We got us 1?

ESPN’s Rachel Nichols also pointed out that James had pushed for Griffin to get a contract extension multiple times this spring.

Wow. The wording of this tweet is…not accidental
Note: LeBron lobbied for David Griffin's contract to be renewed several times this spring https://t.co/9EmU9zqUiJ

For the Cavaliers, this is a scary time. If James did opt to leave in free agency and Irving pushed and was granted a trade, they’d be left to essentially rebuild from the ground up while losing two superstars in the process. At this point, it’s all just rumor and things can change rather quickly, but there’s still cause for concern around Cleveland. 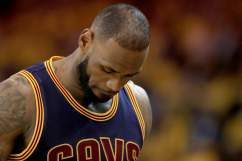