The Los Angeles Lakers have been linked to Lonzo Ball since even before the 2017 NBA draft lottery happened. It was then almost a foregone conclusion that the Lakers would select Ball when they landed the No. 2 pick in the draft. While the two may seem like a match made in heaven, it seems that it’s nowhere near a foregone conclusion.

To make matters even more interesting, if new Lakers president Magic Johnson has his way, he’d wind up with Washington star Markelle Fultz, instead. As RealGM reported, Fultz “murdered” his workout with the Lakers and in turn, Johnson is now “in love” with Fultz. So much so, that multiple sources have Johnson and the Lakers being interested in a potential trade up to No. 1 with the Boston Celtics. 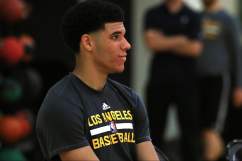 NBA Draft 2017: Why the Lakers Should Draft Lonzo Ball

As for the timing of the rumor, it couldn’t be more interesting. Just hours before the Lakers’ interest in Fultz came out, Adrian Wojnarowski of The Vertical broke the news that the Philadelphia 76ers also had an immense interest in trading up to land Fultz.

Sources: Philadelphia is waiting on medical information on Markelle Fultz, but deep into talks on acquiring Boston's No. 1 overall pick.

Wojnarowski also pointed out the potential terms of a 76ers trade, which included the No. 3 overall pick in this draft and a package that featured another first-round selection in the future.

Boston would acquire Sixers No. 3 overall pick in 2017 and package to include future first from Sixers, sources say. https://t.co/AK5LyYXnYX

It goes without saying that Fultz is making noise on the predraft workout circuit, and the Celtics have all the power and negotiation strength in this situation. But when looking at this from the Lakers side of things, it’ll be interesting to see how an offer of the No. 2 pick and Randle would do against the draft pick loaded offer from the 76ers.

The good news for the Lakers is that the Celtics are surely in a win-now mode, as they were three wins from the 2017 NBA Finals. One key aspect that they’re missing is a starting power forward and to add to that, they have a loaded group of guards that includes Isaiah Thomas, Avery Bradley, Marcus Smart, Terry Rozier and even Jaylen Brown, who played some guard in 2016-17.

On the flip side, if the Celtics are going to opt against signing Thomas to a long-term deal in the future, then drafting Fultz would make sense. But, they could just take the trade and select Ball with the second or possibly third pick in the draft. All potential options are on the table for them, but the focus should certainly be on what the team can do in order to win now.

If there’s one thing we’ve learned about Johnson in his short time as the president of the Lakers, it’s that he’s going to go after what he wants and go after it hard. Don’t be shocked to see Magic even potentially up the offer for Fultz in order to make sure that they land that top pick if it is indeed what they want.

Then again, could we be looking at a smokescreen from the Lakers to ensure that they’re able to land Ball? Time will tell. 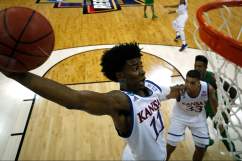 NBA Mock Draft 2017: 2 Round Predictions for Every Pick