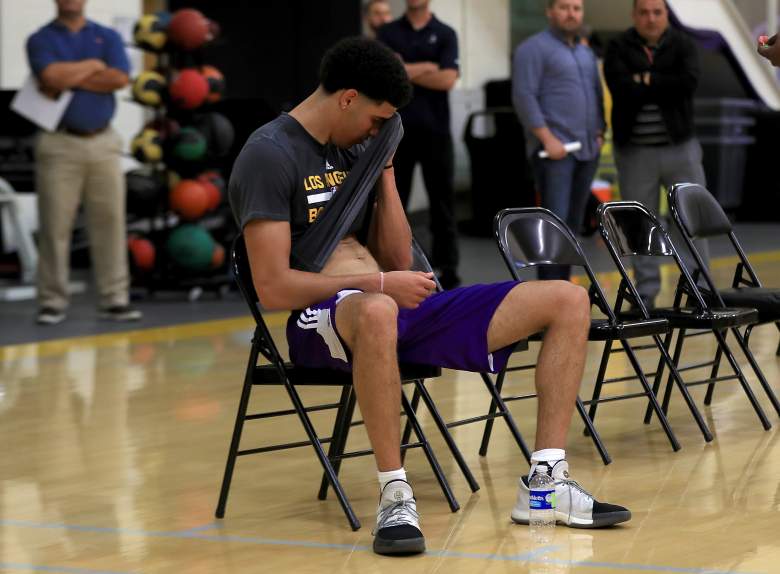 Remember that time LaVar Ball told fans they were not “big ballers” if they could not afford the Big Baller Brand shoes. Fast forward to Lonzo Ball wearing Adidas in what was his biggest job interview to date with the Los Angeles Lakers.

ESPN reported the kicks choice was likely because the shoe has not been mass produced, but it still seems a bit odd. The Ball’s have done several video shoots showing off Ball’s signature ZO2’s.

Lonzo Ball works out for the Lakers in the adidas Harden Vol. 1 "Disruptor"

The shoes could be a holdover from his UCLA days which happen to be an Adidas school.

LaVar Ball spoke to Complex about the process of designing the new Big Baller Brand kicks.

“Everything on that shoe, Lonzo created with no team. Just the creativity of a 19-year-old that knows what he likes. After all these shoes, it’s a mixture of everything that he likes … A shoe is not that big of a deal. It’s two things, stitching and glue. It isn’t a science project,” LaVar Ball told Complex (via CBS Sports).

The Balls had tried to partner with big shoe companies like Nike, Adidas and Under Armour. However, the negotiations fell through and Big Baller Brand opted to turn independent. LaVar Ball spoke with USA Today about the failed negotiations.

This is what’s happening with them, they weren’t ready for this change. Every meeting was with a guy who wanted to endorse. That’s the wrong guy for our meetings. We want co-branding. I need them VPs and CEOs — just like I am.

I’m meeting with the wrong people, so I’m sending them back and saying, ‘I don’t want no endorsement deal.’ That’s where everyone was getting, ‘Oh, LaVar wants a billion-dollar endorsement deal!’ I never said I wanted an endorsement deal. You guys endorse. I’m co-branding. Those Triple B’s will be on the shoe.

Lonzo Ball works out for the Lakers in the adidas Harden Vol. 1 "Disruptor"

With everyone focused on Lonzo Ball's workout with the Lakers today, interesting he decided to wear adidas (Harden Vol. 1) and not BBB.

Cant even afford his own sneakers RT @DefPenKicks Lonzo Ball worked out for the @Lakers in the @adidas Harden Vol. 1 pic.twitter.com/yaQFNLDJnT