Mili Hernandez' team disqualified from girls soccer tourney … she "looks too much like a boy." #BreakingNews at https://t.co/46StWsBFRA pic.twitter.com/YQ8sJcCmfx

Milagros “Mili” Hernandez, 8, was prohibited from competing in a soccer tournament in Nebraska after officials “insisted” she was a boy. Mili was playing for the Azzuri Cachorros Chicas club team in the Springfield Soccer Club tournament over the weekend when officials decided that she couldn’t play because they believed that she was a boy.

Mili had played with her team on Friday and Saturday, but found out that she wouldn’t be allowed to play in Sunday’s semi-finals.

Mili’s coach, Mario Torres, said that there may have been a typo on her gender on the roster. According to the Nebraska State Soccer Association, “Listing a male player on a girls team roster is a violation of state and tournament rules.”

1. Despite Showing Officials Various Kinds of Identification, Mili Was Not Allowed to Compete

To Mili Hernandez: I was a sportsy girl in Omaha once. Don't let them keep you down! Be yourself—it does get better. Much love to #Mili pic.twitter.com/1ug3BEK5Kj

“We showed them all different types of IDs. The president of the tournament said that they had made their decision and he wouldn’t change it. Even though we had an insurance card and documentation that showed she is a female,” Mili’s sister, Alina Hernanderz, told KMTV.

“We had a doctor’s physical form and it gave a description and it said her age and female, so we showed them that but they wouldn’t look at it,” Mili’s brother, Cruz Hernandez, told WOWT 6 News.

“They just weren’t listening. They said I looked like a boy. My brother says it’s only because of my looks. So when they look at me they think I’m a boy but I’m really not,” Mili explained.

2. Mili’s Entire Team Was Disqualified From the Tournament

Torres said that he received a call before Sunday’s scheduled semi-finals. He was told that his team was disqualified, barred from playing that day’s games, according to People Magazine.

“We had already paid to play, we had already played three games – why was this not resolved before the semi-finals? Even if it was a mistake, they did not need to humiliate her or kick the entire team off the field,” said Coach Torres.

The team has filed a complaint with the Nebraska State Soccer Association. On Monday, June 5, the association released a statement, signed by Executive Director Casey Mann. You can read it below.

“The Nebraska State Soccer Association was made aware of issues that occurred during the Ray Heimes Springfield Invitational in Springfield, Nebraska this past weekend. Nebraska State Soccer does not run the tournament, nor is it involved in any of the decisions the tournament makes with regards to rules, players, or teams. Those decisions are made by the tournament director and tournament committee for each event. Additionally, Nebraska State Soccer would never disqualify a player from participating on a girl’s teams based on appearance. However, it is important to note that the roster submitted to the state by the club identified this player as male, and the competition rules for US Youth Soccer do not allow boys to play on a girls’ team. Nebraska State Soccer promotes the game of soccer to players of all ages, genders, levels, and interest. Furthermore, the NSS Bylaws specifically prohibits conduct that discriminates against any individual on the basis of race, color, ancestry, national origin, religion, age, marital status, sex, and/or sexual orientation. While we are disappointed that a player was denied the opportunity to play, that decision was made by entities other than the Nebraska State Soccer Association.”

3. Mili’s Coach Believes This Was Gender Discrimination, But That it May Have Also Been Due to Race

Guess it just means Mili Hernandez might turn out to be okay at this football thing… pic.twitter.com/11ctdOYloG

“The president of the tournament hounded me all throughout the tournament. He disqualified three of my four teams in the tournament for bogus reasons. He caused a lot of problems and for that reason, we feel this had to with race,” Torres told KMTV.

4. Mili Says She Plans on Keeping Her Short Hair

Mili enjoys playing soccer and having short hair is easier to manage — so she’s not going to grow her hair out despite being mistaken for a boy.

According to WOWT, Mili has been a leader on her team. She really loves soccer and she’s good at it. Many are hoping that this incident won’t keep her for giving it her all in the future. Although she admits that the situation “isn’t fair,” Mili is already thinking about getting back into the swing of things.

“There’s other tournaments that I can play,” she told WOWT 6 News.

Dear Mili Hernandez, you are amazing in every way. Thank you for teaching us how to be brave and shining a light on something so hurtful. If you don't know, she is my new hero. Her team was disqualified from a tourney cause they thought she was a boy because of a clerical error that wasn't handled properly. Let's meet soon sister.

Hey Mili, we would love to host you at one of our camps @TeamFirstSA . Be you! 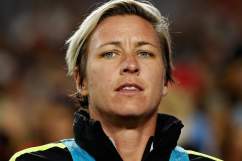