Getty LeBron James and Paul George could look to join forces in 2018.

If you have looked at the top free agents in the 2017 class, you realize it is filled with players that have “buyer beware” stickers. With the exception of a few players like Gordon Hayward, many of the top free agents have either dealt with significant injuries, or are past their primes.

The 2018 NBA free agent class is full of stars, which we have already begun to hear chatter about with players like Paul George and LeBron James potentially on the market. While some of these players are eligible to receive extensions this off-season, Heavy’s list is based on where players free agency status for next season stands now.

James is the kingpin to the whole class, as he could look to assemble a formidable opponent to the Warriors by joining forces with another key free agent (or two). Other players like Russell Westbrook will be incentivized to sign a contract extension with their current team. Even if Westbrook and a few other players remain with their current teams this will still be an exciting class.

Should he stay or should he go? LeBron James will have a difficult decision to make.

Things do not look ideal in Cleveland. In the span of a few weeks, Cleveland did not retain GM David Griffin, and there is increased chatter James wants to end up in Los Angeles in 2018. Adrian Wojnarowski noted on a recent podcast, there is growing belief James will end up is L.A.

“Not only is there no guarantee he’s coming back, I’m not sure there’s an expectation he’s re-signing there. I think they feel, I think within Cleveland and around the league, they feel that he’s very much in play to leave again and likely head out West to one of the two L.A. teams. The Lakers could very well be a target,” Wojnarowski said (via NBC Sports).

The Undefeated’s Mike Wise reported James has no desire to play for the Clippers. If true, that leaves the Lakers as the favorite unless the Cavs can turn things around in a hurry.

James and George could become a package deal if they choose to leverage a partnership onto other teams next off-season. 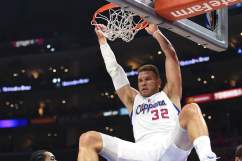 Russell Westbrook could choose a supermax extension over free agency.

Westbrook can be a free agent next summer, but the Thunder can offer him a supermax extension worth more than $200 million. If Westbrook chooses to leave, he would stand to lose a significant amount of money. There would be no shortage of suitors for the reigning NBA MVP, but look for Westbrook to remain in OKlahoma City.

GettyRumors have linked Paul George with the Lakers.

George has been linked to the Lakers since news broke he would not be re-signing with the Pacers after the 2017-18 season. Oklahoma City is banking on their ability to convince George to have a change of heart.

Despite the trade to the Thunder, George is still slated to be a free agent next summer. It will be worth watching whether Westbrook and the Thunder can obtain a long-term commitment from George.

GettyDeMarcus Cousins heads into a contract year with the Pelicans.

So far, the Boogie experiment in New Orleans has not gone as expected. The Pelicans will likely want to keep Cousins, but the big man will have other teams pursuing him as well. The 2017-18 season will be pivotal for the Pelicans to see if Cousins can thrive with Anthony Davis.

Cousins lost out on the ability to sign a supermax deal when the Kings traded him. This factor levels the playing field for other teams looking to sign him next off-season.

Embiid is eligible for an extension this off-season, but the Sixers could opt to let it ride. If Philly opts not to extend Embiid, he will be a restricted free agent in 2018. “The Process” has everything a team wants from a star player. He has a unique skill set, and one of the most charismatic personalities in the NBA.

What’s the catch? Embiid has played 31 games in three seasons, and his health concerns offer a risky proposition for a team looking to spend the kind of cash he will command. Embiid is 23 years old, and a team will take a chance that his injury concerns are behind him.

GettyWe will see how the James Harden-Chris Paul experiment works during in the 2017-18 season.

Rockets fans likely felt excitement after learning Houston acquired Paul. There’s a chance this excitement turned to anxiety after learning Paul opted in to the final year of his contract, but can become a free agent in 2018. This will create a lot of anticipation for the 2017-18 season, but also puts the pressure on the team to perform well. With the threat of Team Banana Boat in the background, there will be plenty of super team rumors involving Paul this season.

GettyJabari Parker has a promising future if he can stay healthy.

Parker was having his best season until he tore his ACL. Parker would be an interesting player if he hits the market. He would be a restricted free agent meaning the Bucks would have the option to match any offer.

Like Embiid, Parker puts teams in a precarious situation of projecting the future of a young player riddled with injuries early in his career. For my money, I’d rather take a chance on a player like Parker than bring in Carmelo Anthony.

GettyCarmelo Anthony could be heading out of New York. (Getty)

Unless Anthony receives a buyout from the Knicks, Anthony will be 34 years old when he hits free agency. He will have plenty of suitors, but his value has taken a hit with the disastrous situation in New York. Anthony gives a team volume scoring, but does that scoring lead to wins? Wherever Anthony lands, the team will have to figure out how his game fits in with their offense. The best thing that could happen for Anthony’s career would be to land on a team with another star.

The Clippers are likely to look drastically different by 2018.

Jordan will still have value on the open market, but it could be diminishing with the evolution of big men in the NBA. Jordan is not a stretch-five, but a team knows exactly what they are getting with him. Jordan is a great shot blocker, good rebounder and gets his buckets around the basket. While he is more of a traditional big man, his ability to run the floor does not inhibit the flow of an offense. Will Mark Cuban try to lock him in a room this time around?

LaMarcus Aldridge is still out to prove he can average a double-double.

It will be worth watching what the market will be for Aldridge. He had a minor scare with heart arrhythmia, but was eventually cleared to play. Aldridge still managed to play 72 games this past season. He did not look like the same go-to player we saw in Portland, but can still be a productive player in the right system.