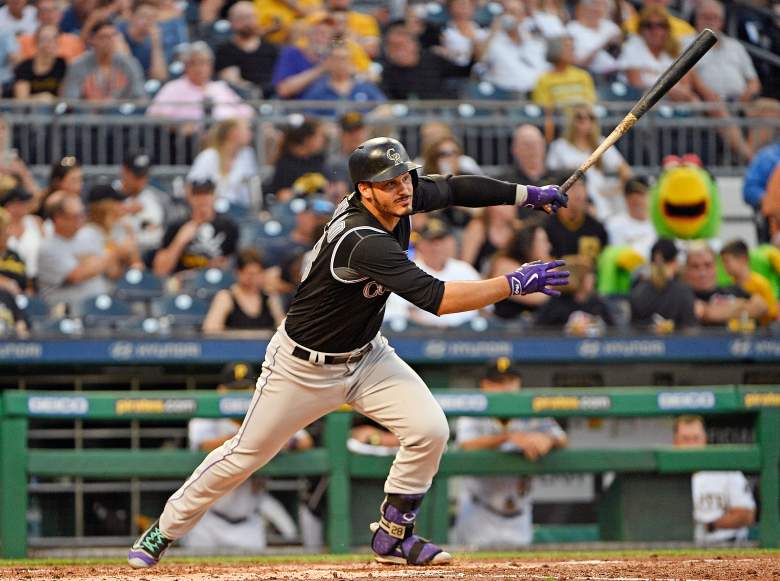 The Colorado Rockies’ Nolan Arenado hit for the cycle in style. The third baseman hit a three-run walk-off home run to complete his cycle and help the Rockies top the San Francisco Giants on Sunday.

BEST IN THE GAME ? pic.twitter.com/SJZxUFQhyD

Arenado came up to bat in the bottom of the ninth with two on and one out, needing a home run to complete his cycle. Arenado took reliever Mark Melancon deep on the first pitch for his first career cycle and 15th home run of the year. According to ESPN, the slugger was mobbed at home plate by teammates, and the crowd chanted “MVP!MVP!”

Colorado had a 3-2 lead in the top of the ninth but gave up three runs. Pinch-hitter Hunter Pence hit a go-ahead homer for the last-place Giants.

The home run led the Rockies to a sweep of the Giants. The Rockies are 5-3 in their last eight games. Sunday’s victory keeps the Rockies in first place in the N.L West. They have a one game lead over the Arizona Diamondback and the Los Angeles Dodgers.

Arenado joins San Diego Padres’ Will Myers, Washington Nationals’ Trea Turner and Texas Rangers’ Carlos Gomez as the only players to hit for the cycle in 2017. Last year, there were only three cycles hit the entire season.

Nolan, you are a STUD. pic.twitter.com/vHngeh4yrl

Arenado tripled in the first, singled in the fourth and had an RBI double in the sixth, before his dramatic game-ending home run.

Arenado’s cycle with the 17th in Coors Field history, tying Fenway Park for most cycles in active ballparks, according to ESPN. Coors opened in 1995, Fenway in 1912. It was Arenado’s second game-ending homer and eight cycle in Rockies’ history.

Arenado became the first player to finish a cycle with a walk-off home run since his teammate, Carlos Gonzalez, in 2010.

Read More
Baseball, MLB
The Colorado Rockies' Nolan Arenado hit for the cycle in style. The third baseman hit a three-run walk-off home run to complete his cycle and help the Rockies top the San Francisco Giants on Sunday.