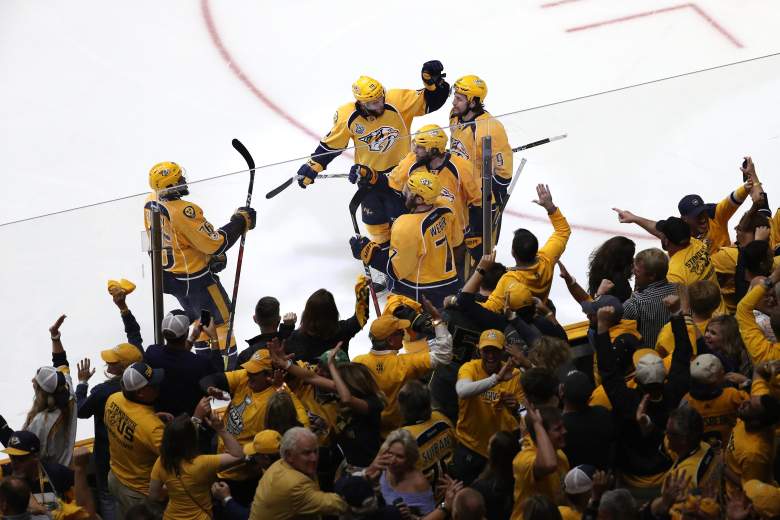 It was a party Saturday night in Nashville as the Predators tounced the Penguins, 5-1. Can they keep it going Monday night? (Getty)

Do we have a series now?

After a wacky first two games in Pittsburgh — one in which the Penguins won with just twelve shots on goal and another where Predators star goaltender Pekka Rinne was pulled — Nashville rebounded at home in Game 3, 5-1, and are now within one win of evening up the Stanley Cup Finals, 2-2.

They’ll have a chance to do that Monday night in “Smashville” on the backs of Rinne and of course, that raucous crowd at Bridgestone Arena.

But can the veteran-laden Penguins ignore the noise and innovative sing-songy chants and take a commanding 3-1 series lead? Let’s take a look at the odds, puckline, and over/under for Game 4:

What the numbers tell us is that Vegas likes the Predators to continue its stretch of home ice dominance (8-1 so far this postseason), and send the series back to Pittsburgh 2-2.

While Game 3 was a must-win for Nashville, it was extremely important they got their goaltender back on track — who had been absolutely terrible in Pittsburgh. Through the first two contests, Rinne — who prior to the Stanley Cup led the NHL in goals against average for the playoffs — had allowed eight goals on only 36 shots. That was good for a abysmal .777 save percentage.

But it appeared Rinne got back into his old form Saturday night, stopping 27 of the 28 shots Pittsburgh threw his way, logging a .964 save percentage. The only one to beat the 34-year-old Finn came off the stick of — who else — Jake Guentzel, who has 13 goals this postseason and four this series.

If one wanted to take a negative outlook on the Predators 5-1 victory from Saturday night — which, to be fair, is quite hard to do — one could look at the continued lack of production from Nashville’s two most dynamic forwards. As noted prior to Game 3, both Filip Forsberg and Viktor Arvidsson had combined to register just one point in the first two games while coming in at a -6.

Meanwhile, the Penguins have received somewhat normal production from their stars outside of Phil Kessel (just one assist through the first three contests). Sidney Crosby has handed out three assists and is a +2, while Evgeni Malkin has two goals so far in the Stanley Cup Finals.

Let’s assume Rinne is back and will continue to thrive on home ice but let’s also expect Penguins netminder Matt Murray to play at a higher level (allowed five goals on 33 shots in Game 3), now having had experience playing in that weird, taunting, yet awesome environment in Nashville.

But do Arviddson and Forsberg step up? Although they managed a convincing win on Saturday without really much help from the two Swedes, the Predators can’t sustain their offensive effort without them. Let’s say at least ONE of them gets it going — I can’t tell you who — and scores the game-winner, improving Nashville to 9-1 at home during these playoffs.

Read More
NHL, Odds, Stanley Cup
Can the Pittsburgh Penguins rebound from a Game 3 loss and take a 3-1 lead over the Nashville Predators Monday night? Heavy has the odds, puckline and a prediction for Game 4 of the Stanley Cup Finals.