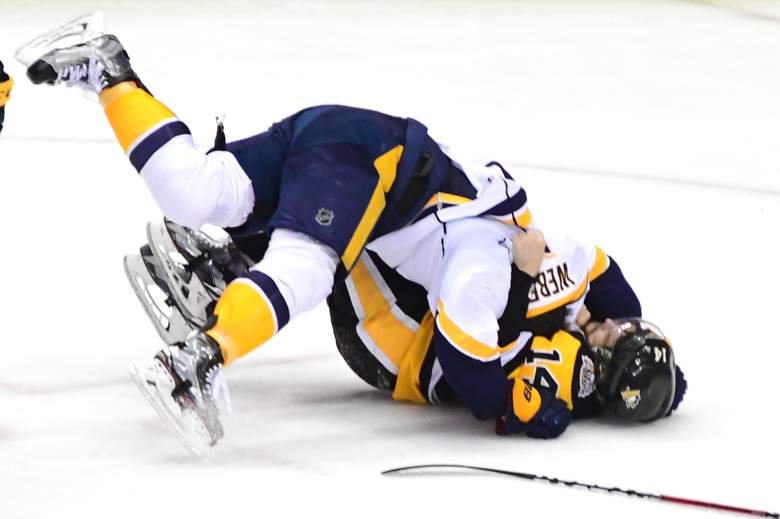 After five games in a row with the same opponent, you can’t but start to hate them. (Getty)

So, there’s good news and bad news for Predators fans.

The bad? Pekka Rinne cannot play in Pittsburgh. He just flat-out can’t. In three games at PPG Paints Arena this series, the star Finnish goaltender has allowed eight goals on 45 shots. That equates to an underwhelming .822 save percentage.

Rinne has been pulled in two of the three games there, having given up three goals in the first period of both Games 2 and 5.

Oh the good news? Game 6 is in Nashville and Rinne, along with the rest of Predator brethren, seem to thrive at Bridgestone Arena. For one, Nashville is 9-1 on home ice during this postseason. Also, in two games at home in the Stanley Cup Finals, Rinne has allowed just two goals on 52 shots, good for a .961 save percentage.

And while Pittsburgh is well-aware of the Predators’ home-ice dominance, they are also keen to the fact Lord’s Stanley Cup will be in the building Sunday night and only one team can walk away with it at this point in time. Up 3-2 in the series, the veteran-laden Penguins know they have Nashville’s backs up against the proverbial wall and will undoubtedly come out and try to put the final nail in the coffin.

Let’s take a look at the odds, puckline, and over/under for Game 6:

What the numbers tell us is that Vegas likes this series to go 7.

So, while Pittsburgh absolutely annihilated Nashville in Game 5, 6-0, Vegas recognizes the Preds ability to thrive off that crazy, catfish-throwing crowd at Bridgestone Arena and figures this series is going to a winner-take-all Game 7 on Wednesday. In two home games during the Stanley Cup Finals, Nashville is outscoring Pittsburgh 9-2.

The blowout in Game 5 may have acted as a well-needed respite for both teams. For example, Nashville defenseman P.K. Subban logged a series low 22:15 of ice time in Game 6, as with the score so out-of-hand, there was no need to have him out there and risk him getting hurt. Any rest coach Peter Laviolete can sneak in for his best skaters, he’ll take.

As for the Penguins most dynamic player, Sidney Crosby spent a series low 18:06 out there on the ice. He did manage to hand out three assists during the limited playing time — including one ridiculous back-handed cross feed to Connor Sheary in the second period to put Pittsburgh ahead 4-0.

While Nashville — as noted above — doesn’t really lose at home, Pittsburgh is arguably playing their best hockey of the postseason right now. Crosby is on an absolute tear right and whether you love him or hate him (I’m sure Subban isn’t a fan), you can’t ignore that. He’s got five points (1 goal, 4 assists) over the last three contests and just seems to be getting better with each passing game.

Also, look who got going in Game 5? I had harped on in previous posts that Pittsburgh needed more out of winger Phil Kessel, who had just one assist through the first four games of the Stanley Cup Finals. In Game 5, Kessel got back on the scoresheet, putting the Pens ahead 5-0 in the second period on an assist from who else — Sidney Crosby. He chipped in two assists of his own, giving him three points on the night. Kessel — like many pure goal scorers — is a bit streaky and if Game 5 is any sign, Kessel could net one or two more in Game 6 and bring the Stanley Cup back to Pittsburgh for a second straight year.

Again, I realize Nashville is 9-1 at home and Rinne has been stellar there but the Penguins smell blood, which is ironic because Penguins are adorable and Predators are by definition those who prey on the weak and vulnerable.

Anyway, I’m going against Vegas on this one and saying this thing ends tonight. Rinne will be good for sure but Crosby will be better. He’s a generational talent and we just need to come to terms with that. Winners win and Crosby will be hoisting his third Stanley Cup on center ice at Bridgestone Arena Sunday night when all is said and done. Sure, he might get hit with a catfish but at that point, I don’t think he will care.

Let’s go with Pittsburgh in Game 6 and take the under on the goal total.