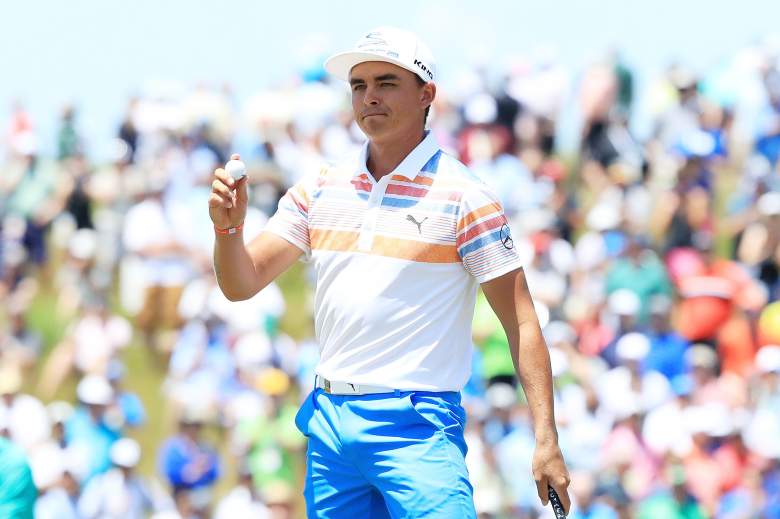 Rickie Fowler reacts after finishing on the ninth green during the first round of the 2017 U.S. Open at Erin Hills on June 15. (Getty)

Rickie Fowler has surged out to the front of the field in the 2017 U.S. Open at Erin Hills Golf Course in Erin, Wisconsin.

Fowler finished the first day with the best round of the day, a 7-under-par 72, and he started the second day on a tear to build upon his lead heading into the weekend.

But this position isn’t new for Fowler. It’s been this way before for the American at major championships. The 28-year-old golfer has won seven tournaments on the tour so far in his career, but none of them have been at a major tournament.

The best season of Fowler’s nine-year professional career came in 2014, when he placed within the top five at all four major tournaments. Though untimely play down the stretch and missed putts turned out to haunt him as he searched for the elusive major championship.

Entering this year’s U.S. Open, Fowler was at 18-1 odds to take home the trophy, and it seems like an increasing possibility that he will be in contention on championship Sunday yet again.

Here’s what you need to know about his best major performances:

1. Fowler Opened 2014 with a 5th-Place Finish at the Masters 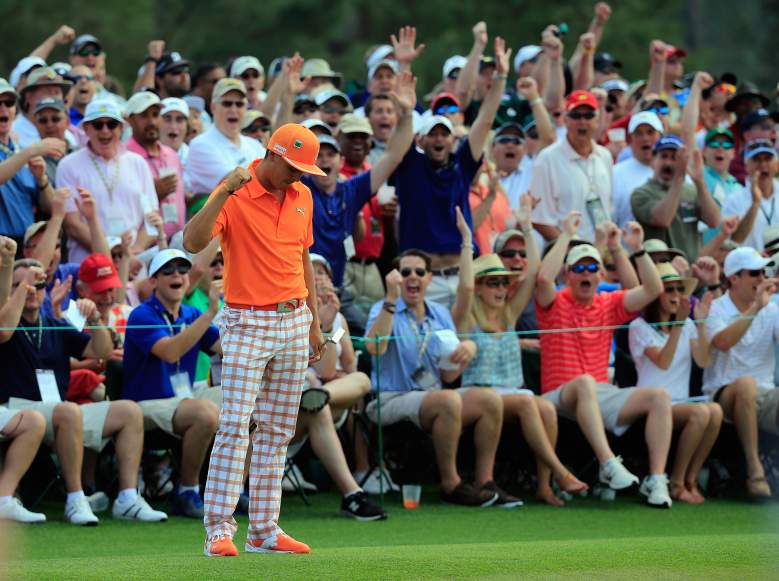 Rickie Fowler reacts to a long putt on the ninth green during the final round of the 2014 Masters Tournament at Augusta National Golf Club. (Getty)

The final day at the opening tournament of the 2014 season saw a thrilling finish. More than one dozen players started the last round at Augusta within five strokes of the lead, and Fowler was one of them.

After shooting the second-best score Saturday with a 67 — Miguel Jimenez shot a 66 — Fowler started the final day at 3-under par. But he struggled mightily on the front nine and made the turn at even par. Two early bogeys on the back nine pulled him out of contention and he finished in fifth place.

The day and the tournament belonged to Bubba Watson, who started the last round tied for the lead with Jordan Spieth. But the elder Watson outplayed Spieth to finish at 8-under and win by three strokes. It was Watson’s second green jacket of his career. 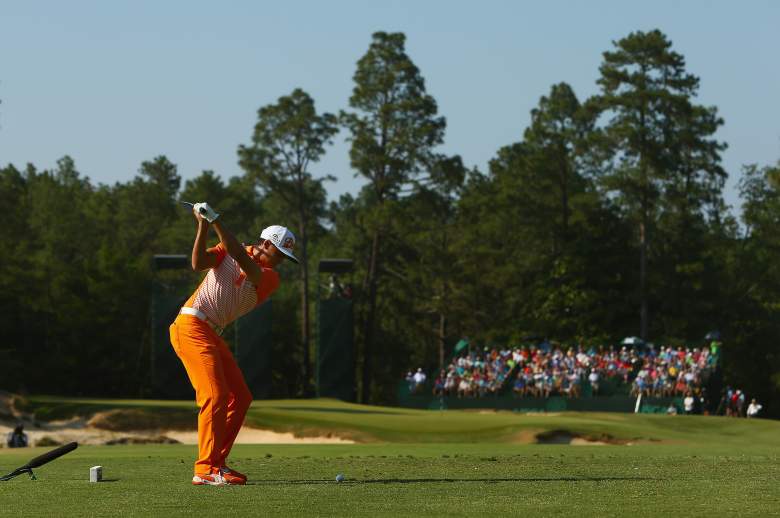 Rickie Fowler hits his tee shot on the ninth hole during the final round of the 2014 U.S. Open at Pinehurst Resort and Country Club. (Getty)

Fowler had his best finish at a major tournament two months after the Masters. He finished in a tie for second place at the 2014 U.S. Open at Pinehurst No. 2 in North Carolina.

Fowler and Erik Compton both finished at 1-under par for the tournament.

Fowler, who was 25-years old at the time, played in the final group pairing of the tournament for the first time of his career. He started the final day with a lot of work to do, sitting five shots behind Marin Kaymer. He started the round getting into a bit of trouble early on with a double-bogey on hole No. 4, but rallied for a birdie on No. 5 to keep pressing.

But Kaymer was a man on a mission during the tournament and finished ahead of Fowler and Compton by eight strokes.

“You can’t get ahead of yourself, you have to stay patient, have to stay in the moment and keep going through the process,” Fowler said to reporters after the tournament. “With guys that are playing well, there’s young guys playing well and obviously Bubba with two green jackets. And it’s fun to see, but I also want to be in that position at some point. 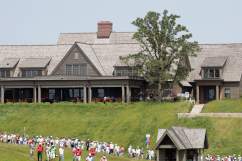 3. He Followed-Up the U.S. Open Performance by Taking 2nd at the British Open 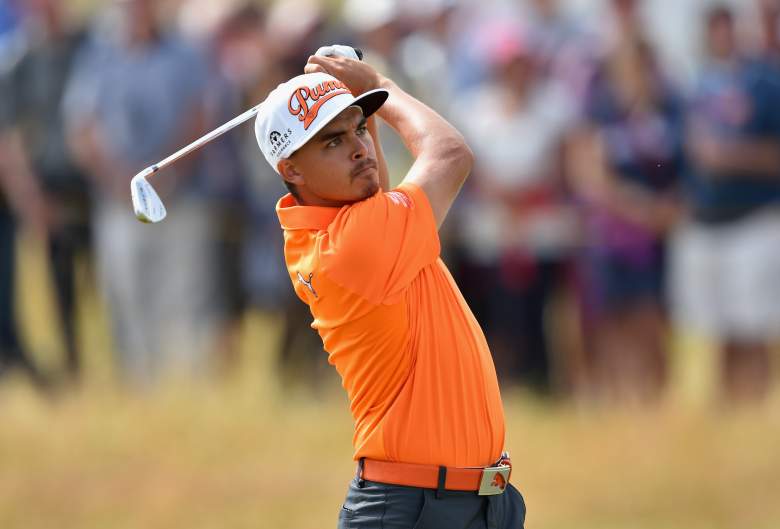 Rickie Fowler hits an approach shot during the final round of The Open Championship at Royal Liverpool on July 20, 2014. (Getty)

Fowler’s solid 2014 season continued into the third major of the year. He finished in a tie for second with Sergio Garcia at The Open Championship at Royal Liverpool.

Fowler and Garcia finished the tournament behind champion Rory McIlroy, who won by two strokes. McIlroy started the final round of the tournament with a big six-stroke lead, but many golfers — including Garcia and Fowler — made a late push and put the pressure on McIlroy.

Fowler started the final round with a bogey, and didn’t ever pose too much of a threat to McIlroy, with whom he was paired for the last 18 holes. Fowler finished the last day shooting a 67 and shot below 70 in all four of his rounds at the 143rd Open Championship.

4. Fowler Closed 2014 with a 3rd-Place Finish at the PGA Championship 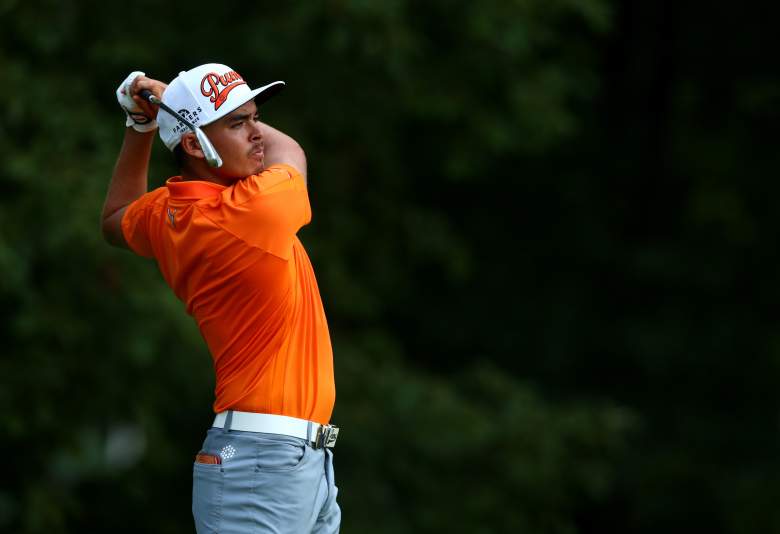 Rickie Fowler hits his tee shot on the 11th hole during the final round of the 96th PGA Championship at Valhalla Golf Club on August 10, 2014 in Louisville, Kentucky. (Getty)

At the last major of 2014 in August, Fowler and three others battled for the PGA Championship trophy.

Fowler, McIlroy, Phil Mickelson and Henrik Stenson were all in contention at the final day at Valhalla Golf Club in Louisville, Kentucky.

Fowler had solid scores in the first two rounds of the tournament and closed Saturday with a 67 to put him just two strokes behind first-place McIlroy and one back of second place Bernd Wiesberger. The golfer started championship Sunday on fire, recording birdies on four out of five holes in the front nine to take the lead.

But Mickelson and Stenson had marvelous front nines, too. Mickelson had four birdies on the nine holes while Stenson had five and all three golfers surpassed McIlroy. An eagle on hole No. 10 pushed McIlroy back into contention, and a bogey by Fowler and Stenson on hole No. 14 gave McIlroy an even better opportunity to capitalize.

It ended up being one of the best finishes to the PGA Championship in recent memory.

Fowler missed a lengthy putt on 18 that would have put the pressure back onto McIlroy, but it didn’t matter anyway. McIlroy two-putted for par and finished one shot ahead of Mickelson for the win. 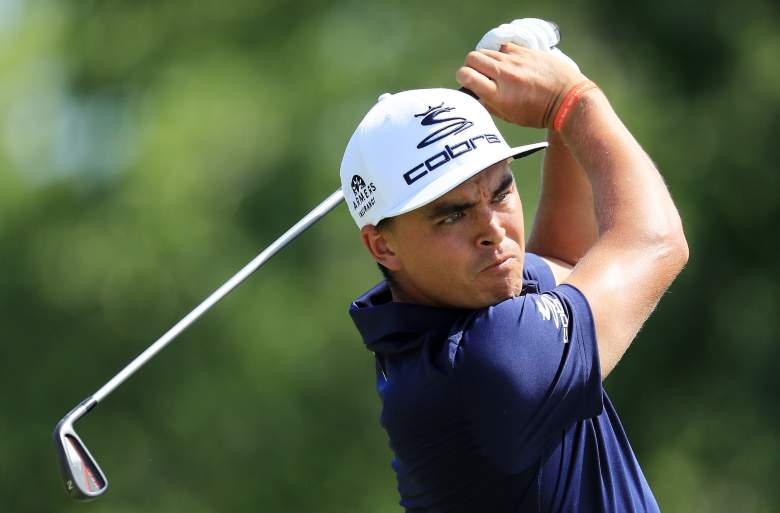 Rickie Fowler plays his shot from the fourth tee during the second round of the 2017 U.S. Open at Erin Hills on June 16. (Getty)

Before the 2014 season, Fowler’s best finish at a major tournament was in 2011 at The Open Championship. He finished in a three-way tie for fifth place with Chad Campbell and Anthony Kim.

His best-ever finish at a major at that point of his career was due to a 68 that he shot in the third round of play. He closed out the final two rounds by shooting 70s to finish at even for the tournament and took home a shade over $180,000. 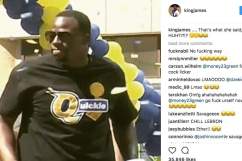