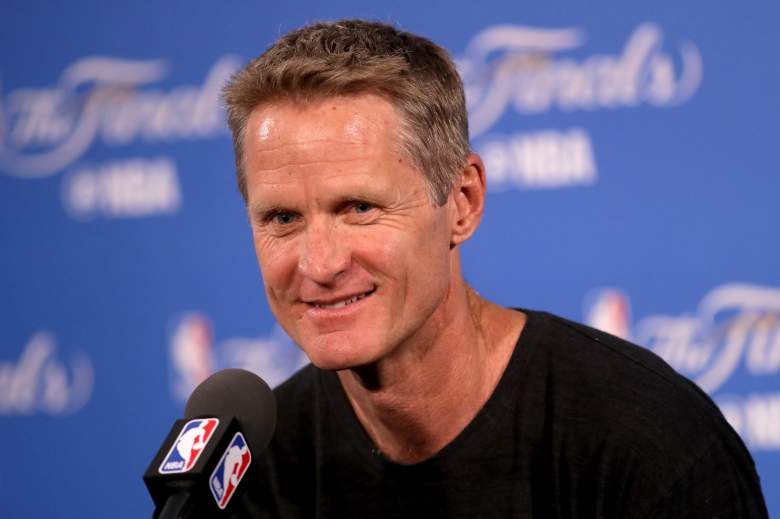 When Kevin Durant signed with the Golden State Warriors last summer, a finals rematch between the Warriors and the Cleveland Cavaliers seemed inevitable. On June 1st, when the 2017 NBA Finals tip off, it becomes a reality. For the third time in as many years, the Warriors and the Cavs will battle it out in the NBA Championship. The Warriors won in 2015. The Cavs won in 2016. 2017 is the rubber match.

Yet despite the addition of Durant, the Warriors could be at a disadvantage. Steve Kerr, the team’s coach since 2015, has been dealing with the painful repercussions of two back surgeries he underwent in 2015. Kerr has missed the majority of the team’s post-season run, watching games from the locker room and delivering the occasional half-time speech. Under the stewardship of Assistant Coach Mike Brown, the Warriors still managed to roll through the first three rounds of the playoffs undefeated, but that shouldn’t diminish the importance Kerr plays.

Kerr has very quickly become one of the best coaches in the league, going 246 – 207 in his first three seasons. The Finals could easily be when his absence will be felt the most, as the Cavs represent the Warriors’ toughest test yet.

Here’s what you need to know about Kerr.

1. Kerr Was Born in Beirut, Lebanon 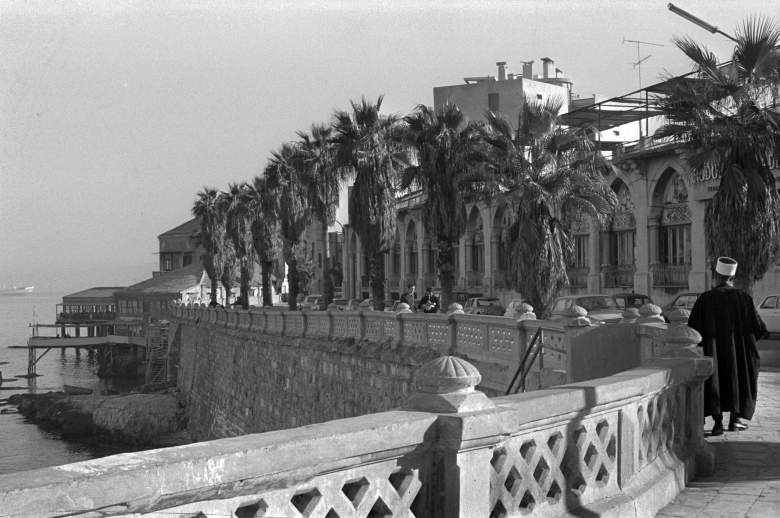 Kerr was born on September 27, 1965 in Beirut, Lebanon. Malcolm Kerr, his father, was an accomplished academic whose area of expertise was the Middle East. The family traveled throughout the region during Kerr’s childhood, living in a handful of countries in the area. Kerr attended school in both Egypt and Lebabnon, as well as Los Angeles.

On January 18, 1984, only eighteen months into his tenure as President of American University in Beirut, Malcolm Kerr was murdered outside of his office by gunmen associated with the Islamic Jihad, a group that can be linked to the founding of Hezebollah, an Islamist militant group and political party based in Lebanon. At the time of his father’s death, Kerr was a freshman halfway across the world at the University of Arizona, and according to his teammates, didn’t have much to say regarding his father’s sudden death. Kerr chose not to fly to Lebanon for his father’s service, opting instead to go to practice and to play Arizona State, in which he had his best game as a freshman, hitting 5 of 7 shots.

Kerr went on to marry his college girlfriend Margot Brennan in 1990. The couple have three children: Nick, Maddy and Matthew. Nick played basketball for University of San Diego, while Maddy was a successful volleyball player for the University of California at Berkeley.

2. Kerr Bounced Around the NBA Before Winning 5 Titles With the Bulls & Spurs 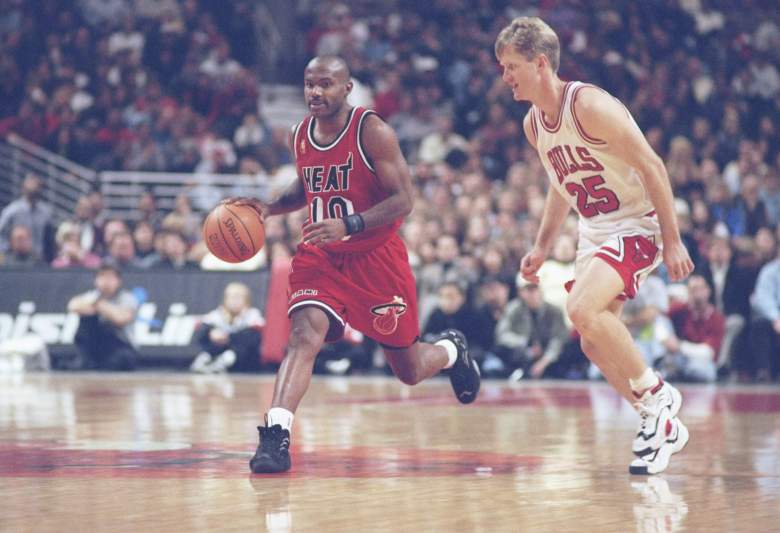 Kerr played for the University of Arizona Wildcats for four seasons, from 1983 to 1988. He helped the team reach the Final Four of the NCAA Division 1 Men’s Basketball Tournament in 1988 and that year set a NCAA record for 3 point percentage, shooting 57.3%. In 1986 Kerr was a member of the US Men’s Basketball Team, who took home a gold medal at the FIBA Men’s Nationals in Spain.

In 1988 Kerr was drafted by the Phoenix Suns in the second round of the NBA Draft. He was with the Suns for one season, appearing in 23 games. The following season he was traded to the Cavaliers, where he would spend three seasons before being traded to the Orlando Magic during the 1992-93 season.

Kerr signed with the Chicago Bulls in 1993. After two rocky seasons, Michael Jordan ended his retirement, returned to the team and the Bulls went on to win three titles in a row. The 1995-96 team would set the record for wins during the regular season, going 72-10, before beating the Seattle SuperSonics in the NBA Finals. The next year, Kerr hit the game-winning shot as the Bulls beat the Utah Jazz.

Winning three championships in a row is impressive. But winning four in a row? Well, that’s something better than impressive and it’s something Kerr did after being traded from the Bulls to the San Antonio Spurs, who beat the New York Knicks in the 1999 NBA Finals. Kerr would go on to win one more title with the Spurs in the 2003 and would retire shortly after, doing so with the highest career three-point percentage for any player who had made at least 250 three pointers.

3. Kerr Was an Analyst Before & After He Became the Suns General Manager 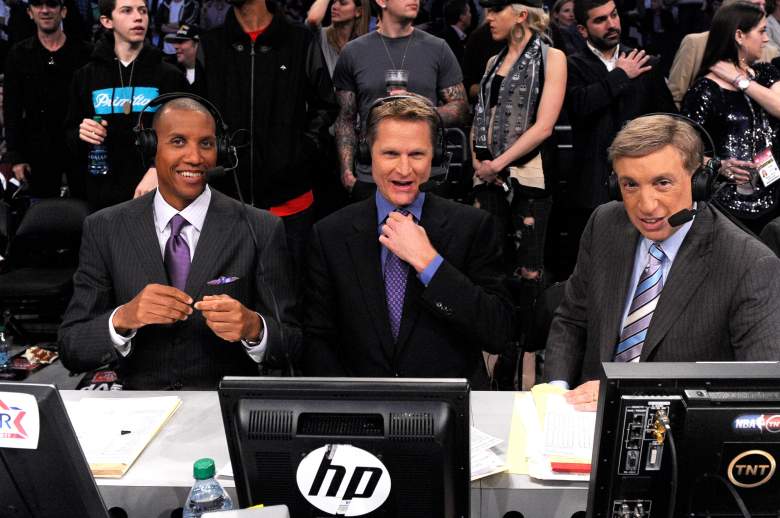 Kerr with Reggie Miller and Marv Albert in 2011 (Getty)

Immediately following his retirement, Kerr joined TNT as an analyst, teaming up with Marv Albert. In addition to calling games together, the duo lent their voices to video games, appearing in EA Sports’ NBA Live games from 2006 to 2010. Kerr would later provide analyst for the NBA2k games from 2012 to 2015.

In 2004, Robert Sarver, an Arizona businessman, was looking to buy the Suns. He enlisted Kerr to help finish the deal and in the process, Kerr walked away with a 1% share of the team. Kerr would later sell his share in 2015, a year before Sarver was named the worst owner in the NBA in an ESPN poll. Kerr made the Suns his full-time gig in 2007, leaving TNT after being named the Suns General Manager and President of Basketball Operations. Kerr’s Suns team were competitive, making the playoffs each year he was there. In 2010, they lost to the Lakers in the Western Conference Finals. 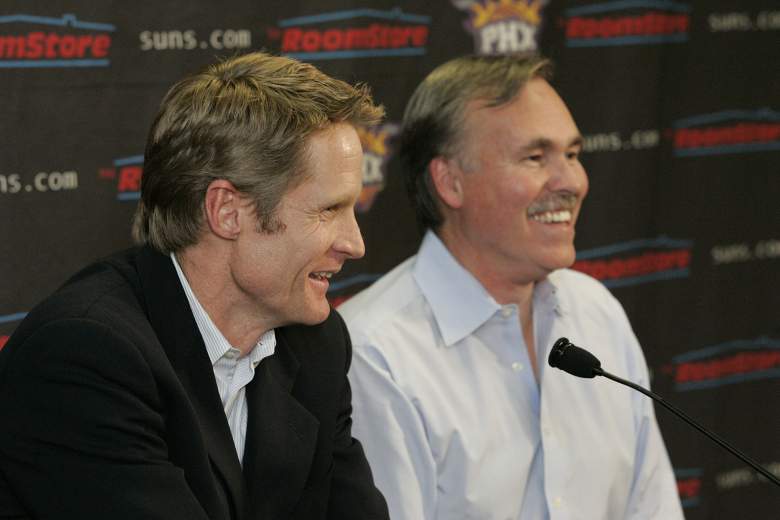 Kerr’s biggest moves with the Suns involved Shaquille O’Neal. The Miami Heat traded O’Neal to the Suns in 2008, but O’Neal only lasted on year in Arizona and was traded to the Cavaliers in 2009. Kerr left a year later, stepping down from his positions in June of 2010.

4. The Knicks Wanted Kerr, but He Chose the Warriors Instead 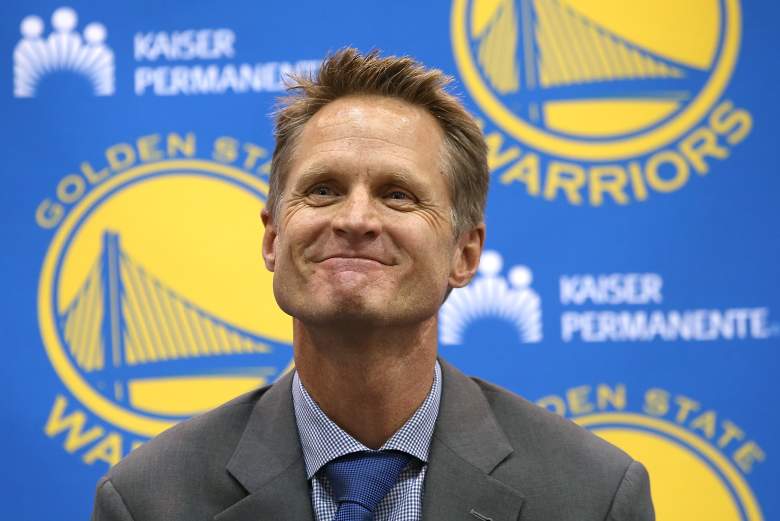 In the days that followed the 2013-14 NBA season, Kerr emerged as the most sought after coach on the market. Now an established and respected broadcaster, Kerr had made it known that he was interested in coaching. His old coach with the Bulls, Phil Jackson, had recently joined the front office of the Knicks and had expressed interest. So had the Warriors. The Knicks were the more high-profile destination and Jackson and Kerr had history together, but the Warriors were coming off a season in which they went 51-31 and despite losing in the first round of the playoffs, showed enormous signs of potential.

Potential ended up winning out. That and location. Since arriving in the states in the early eighties, Kerr had made his home in California and the idea of coaching in his home state was incredibly appealing. 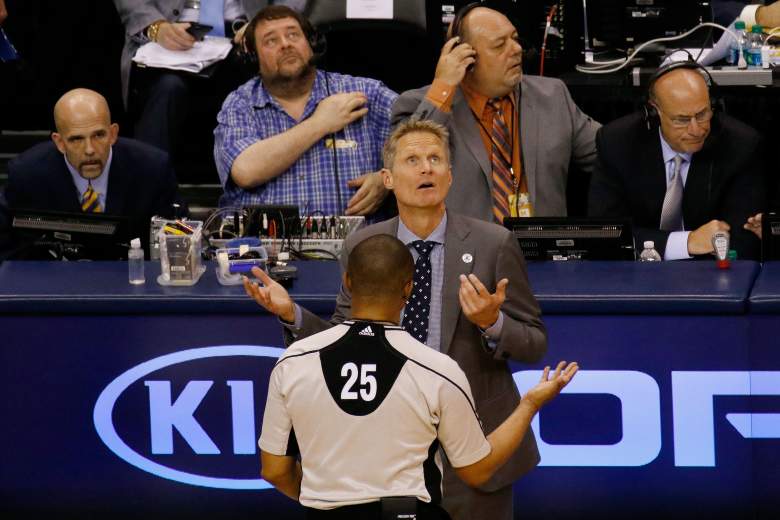 It only took one season for Kerr to make his mark on the league. In 2014-15, the team went 67-15, Kerr broke the NBA record for most wins by a rookie head coach, and the Warriors won the NBA Championship, defeating the Cavaliers in six games. Kerr became the first rookie coach to win the NBA Finals since 1982, when Pat Riley did it coaching the Lakers. The following year seemed to be going even better for Kerr and the Warriors, as they broke the Bulls’ record for most wins in the season with 73 and Kerr was named NBA Coach of the Year. This time though, the Cavs got the best of them in the NBA Finals, where the Warriors lost in seven games.

5. Kerr Has Been Dealing With the Effects of Multiple Back Surgeries During the 2017 Playoffs 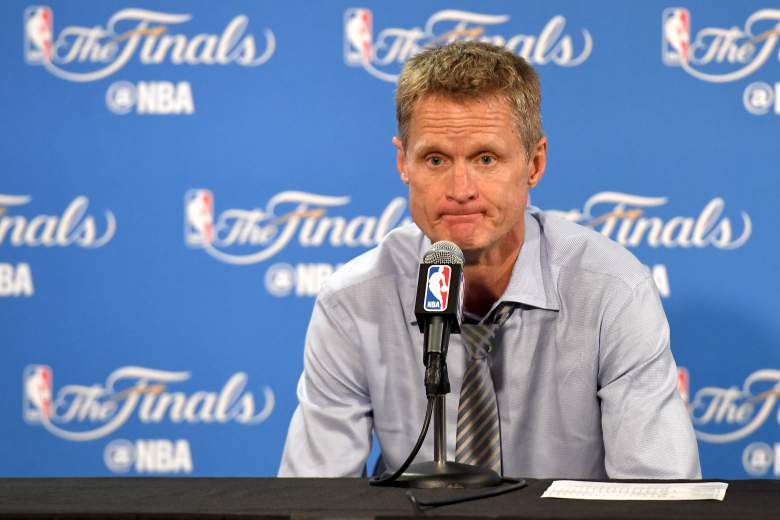 Two days into training camp prior to the 2015-16 season, Kerr was forced to take a leave of absence from the team. The coach had had surgery in June to repair a ruptured disk and a follow-up surgery in September. With training camp underway, the combination of lingering pain and constant rehabilitation had proven too much for Kerr. Luke Walton, one of Kerr’s assistants, took over for him in his absence. Kerr would miss the first 41 games of the 2015-16 season, with Walton helping to lead the team to an impressive 37-4 record.

Kerr was able to coach throughout the 2016-17 season, but remained bothered by symptoms related to the surgeries. By the time the season ended, the headaches and pain related to a spinal fluid leak were bad enough to force Kerr to leave the bench and once again take some time off. Mike Brown, an assistant who had previously coached the Lakers and the Cavaliers, assumed head coaching duties with Kerr gone.

Even though Kerr isn’t on the bench with then, Warriors’ players such as Kevin Durant have talked at length about his role with the team, saying that despite his absence “you could feel his presence.” Joe Lacob, the Warriors’ majority owner told ESPN that he’s comfortable with Kerr taking as long as he wants to recover and that “he is still here. He’s in the locker room. He’s around. His imprint is all over this. I don’t view this as he’s not here; he’s just not on the bench.”

Kerr’s status for the Finals is still up in the air.