Tim Hague has died following a boxing match on Friday night. The boxer/former UFC fighter was left brain dead after being knocked out (TKO) by opponent Adam Braidwood in the second round.

The family of Tim Hague tells me that the 34-year-old local boxer has died. Hague suffered a brain injury during his Friday night fight.

Hague received several powerful blows to the head and was knocked down on multiple occasions during the fight. While circling away from his opponent, Hague was caught with a right hook and appeared to fall to the mat following a short left follow-up punch from Braidwood.

Perhaps the apex of Hague’s fighting career came with his time with global mixed martial arts organization The Ultimate Fighting Championship. Hague submitted former heavyweight contender Pat Barry with a guillotine choke in the first round of his UFC debut. Hague was knocked out by Todd Duffee in the first round of his next fight and suffered submission losses to Chris Tuchscherer and Joey Beltran. His final loss in a UFC match came via TKO at the hands of Matt Mitrione in January 2011. He was then cut by the promotion.

According to Hague’s MMA and boxing records, this is not the first time he’s been knocked out in a fight. His first KO loss was at the hands of Duffee. Following the TKO by Mitrione, he was stopped in April 2012 by Mike Hackert and Smealinho Rama in May 2014. He was knocked out three times over the span of eight months, beginning with KO at the hands of Evgeny Erokhin in August 2015, followed by TKO losses to Tony Lopez and Tanner Boser in December 2015 and March 2016, respectively. His final loss of his MMA career came via a head kick TKO from Michal Andryszak, followed up by punches, in July 2016.

Hague suffered a previous TKO loss in boxing in December 2016 at the hands of Mladen Miljas.

You can see the fight between Hague and Braidwood in the video below. Viewer discretion is advised. 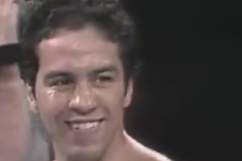 Bobby Chacon Cause of Death: How Did the Boxer Die?