All throughout Monday night, there are awards being handed out to NBA players and coaches, which will wrap up with the Most Valuable Player award being handed out. This was the first-ever NBA Awards show and was hosted by rapper Drake. But, before getting to the MVP award, though, the fans got to vote on quite a few awards and one that was a very popular vote was the candidate for the NBA Dunk of the Year award.

In the end, it was Oklahoma City Thunder guard Victor Oladipo who took the crown, topping Los Angeles Lakers forward Larry Nance Jr. and Minnesota Timberwolves (now Chicago Bulls) guard Zach LaVine. If you don’t remember the moment, fortunately, the Thunder’s official Twitter account hooked us up, as you can see above.

As if Oladipo winning wasn’t a highlight enough, Nance Jr. took to Twitter to let everyone know that he was a bit salty from not winning the award. And of course, he did so in a pretty epic fashion as well, by tweeting out a nice bag of Lays potato chips.

If for some reason you haven’t seen Nance’s dunk, he had a pretty strong argument of his own to take home the crown, as he completely put former Brooklyn Nets big man Brook Lopez on a poster. It wasn’t just a poster, though, it was a legitimate moment that deserves to live in the memories of NBA fans forever.

And in case you wanted to check out LaVine’s dunk (he is a reigning NBA Dunk Contest champion), it came in the form of a huge slam over top of Phoenix Suns center Alex Len.

Regardless, all three players were deserving of praise for even being named finalists for this award, because it means that you have to be pretty insanely athletic. 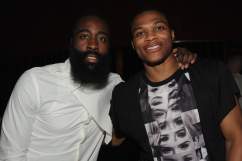