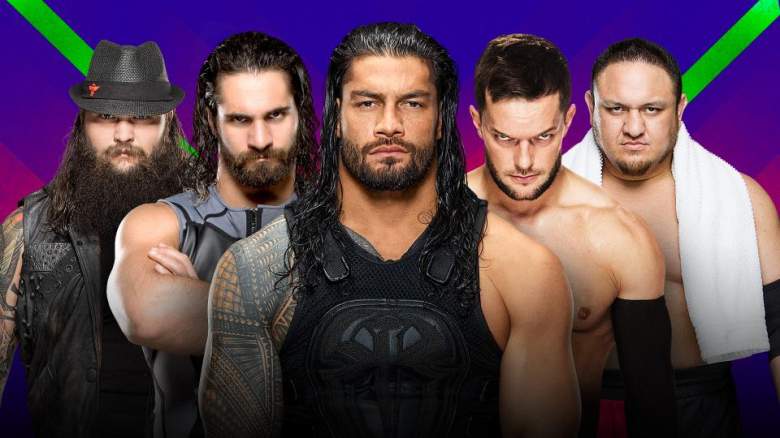 A fatal five-way will take place in the main event of ‘Extreme Rules’ 2017. (WWE.com)

The next WWE pay-per-view after Extreme Rules is Money in the Bank, a SmackDown Live branded event which airs in exactly two weeks, on June 18th, 2017. It will take place at the Scottrade Center in St. Louis, Missouri.

Money in the Bank will be headlined by a World Championship rematch between Jinder Mahal and Randy Orton. Of course, it will also feature the traditional Money in the Bank ladder match, with the participants being Kevin Owens, AJ Styles, Baron Corbin, Sami Zayn, Dolph Ziggler, and Shinsuke Nakamura.

In addition, Money in the Bank will feature the first ever Money in the Bank women’s ladder match, with the participants being Becky Lynch, Charlotte Flair, Natalya, Tamina, and Carmella. The winner will go on to face Naomi for the SmackDown Women’s Championship.

The next Monday Night Raw branded pay-per-view after Extreme Rules is Great Balls of Fire, which will air on July 9th, 2017. It will take place at the American Airlines Center in Dallas, Texas. This pay-per-view will be headlined by a Universal Championship match between Brock Lesnar and whoever wins the fatal five-way match at Extreme Rules; the five possible winners are Seth Rollins, Roman Reigns, Finn Balor, Bray Wyatt, and Samoa Joe. Though we don’t yet know who will win, the rumor is that the victor will either be Finn Balor or Seth Rollins.

Then, two weeks after Great Balls of Fire, the Battleground pay-per-view will be held. This will be a SmackDown Live branded pay-per-view taking place at the Wells Fargo Center in Philadelphia, Pennsylvania.

At the end of August, the WWE will hold its biggest pay-per-view event since WrestleMania: SummerSlam, which will take place at the Barclays Center in Brooklyn, New York. It’s too early for us to know anything about what that card will look like, but the rumor has been that SummerSlam will be headlined by a match between Brock Lesnar and Braun Strowman with the Universal Championship on the line.