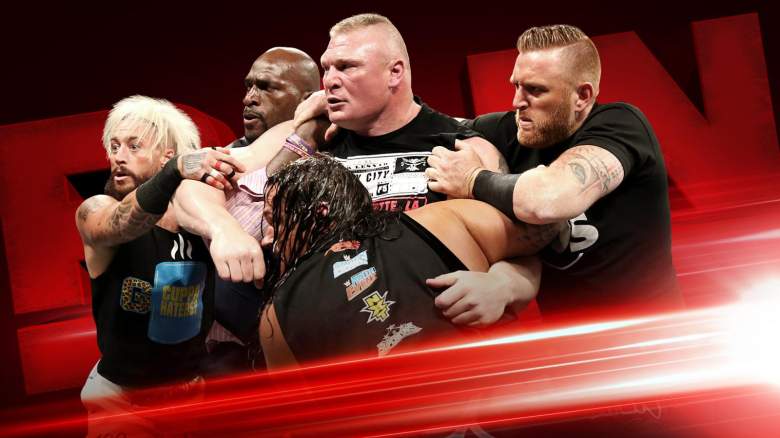 Brock Lesnar is held back from Samoa Joe on Monday Night Raw. (WWE.com)

A new episode of Monday Night Raw just wrapped up on the USA Network. Here’s what happened:

11:05 – After the match, Kurt Angle enters and congratulates Sasha Banks. Alexa Bliss then enters, holding up her Raw Women’s Championship. Banks attacks Bliss and grabs the championship, holding it up. Bliss gets the championship back, and the two stare each other down as the show closes.

10:27 – Backstage, Alexa Bliss tells Nia Jax that they’re not that different because they’re both judged by how they look. Bliss also wishes Nia Jax good luck in the match tonight. Jax says that she’ll be seeing Bliss and the Women’s Championship at Great Balls of Fire.

10:25 – Backstage, Paul Heyman says that Brock Lesnar truly has his back up against the wall, and his match against Samoa Joe won’t be easy. But Lesnar will ultimately take Samoa Joe to Suplex City.

10:17 – After the match, Akira Tozawa enters the ring, ready to fight Neville. Titus O’Neil enters, saying that they shouldn’t fight for free, especially because he just booked a match between the two of them at Great Balls of Fire.

10:00 – Paul Heyman says that Samoa Joe is a Samoan dumbass. Brock Lesnar enters, and as he’s coming out, he’s attacked from behind from Samoa Joe. The two brawl, and they have to be separated.

9:54 – Backstage, Bray Wyatt tells Seth Rollins that if he truly valued his redemption, he would give in to his true self. Wyatt says that Rollins must be cleansed, and he will help him do that.

9:47 – Big Cass confronts Corey Graves on commentary. He says that he wants to snap his neck, but Kurt Angle told him he can’t; Cass says that Graves must have some serious dirt on Angle.

9:31 – Enzo Amore enters. He does his usual intro, but without the Big Cass part of it. He says that he’s not doing too good and has been trying to get in touch with Big Cass all week; he’s going to wait in the ring as long as it takes until Big Cass comes out to face him, he says.

Big Cass tells Enzo that he never knows when to shut up. But Big Cass then says that he’s ashamed of what he did last week because he and Enzo truly are brothers, and he accepts Enzo for who he is. Finally, he says that he’s sorry. They shake hands and hug.

Big Cass says that if anyone thought they were going to throw away their friendship because of this, they’re SAWFT. Enzo and Cass start celebrating as their theme plays, but after at least 60 seconds of this, Big Cass finally attacks Enzo.

8:57 – In a segment of Miz TV, Miz brags that he has exposed Dean Ambrose for the fraud he is. Maryse gives him the cold shoulder. Miz then says he wants to welcome out the only celebrity who has been talked about more than him this past year: LaVar Ball. LaVar Ball comes out accompanied by Lonzo Ball, and The Miz seems to be under the impression that LaVar wants to take him under his wing, which is not the case. LaVar and The Miz almost get into a fight, but they’re interrupted by Dean Ambrose.

8:55 – In Kurt Angle’s office, Bayley draws a random piece of paper to determine where she’ll enter in the Gauntlet Match later tonight. That Gauntlet Match will determine who will face Alexa Bliss for the Women’s Championship at Great Balls of Fire. We don’t find out what Bayley drew, however.

8:47 – Backstage, Paul Heyman says that tonight, Brock Lesnar will call out Samoa Joe. As Heyman is talking, Samoa Joe comes in and intimidates him.

8:44 – Goldust and R. Truth are scheduled to have a match. However, before the match even begins, Goldust attacks R. Truth so badly that R. Truth is unable to compete.

8:37 – In another pre-taped segment, Goldust says that tonight, The Shattered Truth hits Hollywood. He says that he’s putting the finishing touches on his masterpiece.

8:14 – Elias Samson gets ready to sing a song in the ring, accompanied by Cesaro and Sheamus. However, before he can get started, he’s interrupted by The Hardy Boyz.

8:00 – Roman Reigns enters. He says that he accepts Braun Strowman’s challenge to an Ambulance Match at Great Balls of Fire. Suddenly, an ambulance backs into the arena. Roman goes to investigate, only to discover that the ambulance is empty. At that moment, he’s attacked from behind from Braun Strowman. Strowman attacks Roman and then throws him into the back of the ambulance, which drives away.