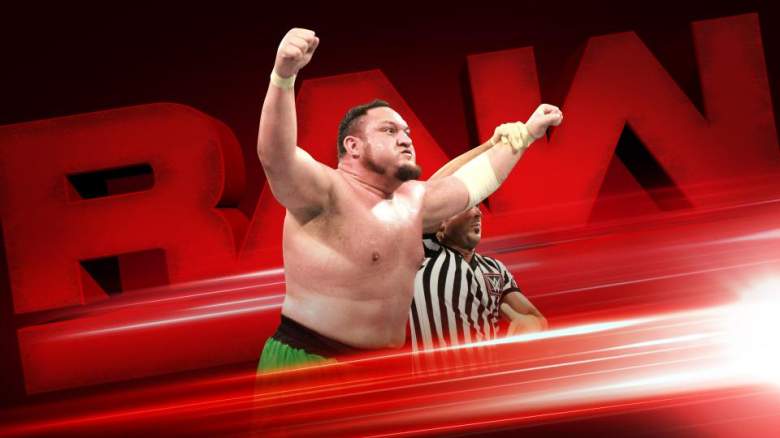 Samoa Joe is the number one contender for the Universal Championship. (WWE.com)

10:45 – Samoa Joe defeats Seth Rollins. Towards the end of the match, Bray Wyatt’s intro starts, which distracts Seth Rollins and allows Samoa Joe to lock Rollins into a Coquina Clutch, leading to his victory.

10:39 – Backstage, Paul Heyman is being examined by medical professionals when he gets a call from Brock Lesnar. Heyman tells Lesnar that it’s time to instill in Samoa Joe a fear of Brock Lesnar; he thinks Lesnar should show up next week and he should unleash the Beast. It’s soon confirmed that Brock Lesnar will be on Raw next week.

10:26 – Backstage, Alexa Bliss says that all of the female superstars on Raw either have no pride, are jealous of her, or both.

10:25 – Backstage, Big Cass suggests that maybe Big Show is the person who has been attacking them. Big Show says it wouldn’t even be possible for him to sneak around backstage.

10:18 – Big Show and Enzo Amore defeat Luke Gallows and Karl Anderson in a match that only lasts a few minutes. The match ends when Big Show throws Enzo Amore at Karl Anderson, and Amore gets the pin.

10:14 – Enzo Amore enters. He says that he called in a favor for this match, and Big Show enters as his tag team partner. Big Show and Enzo Amore cut a promo together for a few minutes, with Big Show doing the “S-A-W-F-T” part.

10:00 – The Miz enters, introduced by Maryse, for a massive Intercontinental Championship celebration. He says that he is the only WWE superstar who deserves this title and that this is the beginning of the Intercontinental Championship Comeback Tour. During the segment, a guy in a bear costume is holding up a big “congratulations” sign, but Maryse reveals that she didn’t hire him. The Miz didn’t hire him, either, and so he starts beating up the guy in the bear suit thinking it’s Dean Ambrose. However, it turns out to just be some random guy.

Then a giant gift is rolled out, which is exactly the right shape for someone to be hiding in it. The Miz starts crushing it assuming Dean Ambrose is inside. But then Maryse reveals that this is a gift from her: it was an expensive grandfather clock, which is now broken. Maryse storms off angrily. The Miz is extremely upset, demanding Dean Ambrose show his face. Dean Ambrose then reveals himself to be one of the camera guys, who has been standing around there the whole time, and Ambrose executes dirty deeds before taking a drink of The Miz’s champagne.

9:57 – Back from commercial, Enzo Amore is told he needs to find himself a new partner for his match against Luke Gallows and Karl Anderson tonight, as Big Cass is going to be taken out of action.

9:52 – Backstage, Big Cass is found lying on the ground, apparently having been attacked. Enzo Amore comes to his aid.

9:48 – Kalisto defeats Titus O’Neil in a brief match that only lasts about two minutes.

9:47 – Backstage, Kurt Angle says that his conversation with Corey Graves is personal and that he’s attending to a private matter. Kurt Angle leaves, and Dean Ambrose then slips in the door Angle came out of.

9:42 – Kurt Angle interrupts the commentary team to have a private conversation with Corey Graves, with Angle pointing to his phone the whole time. We don’t get to hear the conversation. Back on commentary, Graves avoids questions about what’s going on.

9:40 – Backstage, Alexa Bliss approaches Sasha Banks, Mickie James, and Dana Brooke. They blow her off, with Sasha Banks leaving immediately. Alexa tells them they should be insulted that Nia Jax is cutting the line and getting a championship match tonight. She says they all must stand together against Nia Jax. Dana Brooke says that this is Alexa’s problem. Mickie James says that she’ll be at ringside watching Alexa deal with Nia Jax tonight.

9:32 – After the match ends, Neville enters. He tells TJ Perkins that he just spoke to Kurt Angle and has some bad news, implying Angle said no to a match between Perkins and Neville. TJ Perkins gets upset and demands that the two of them go backstage to speak to Angle. Suddenly, Neville attacks TJ Perkins. He then says that he and Perkins will fight for the Cruiserweight Championship tomorrow night on 205 Live.

9:24 – Backstage, TJ Perkins runs into Neville. Perkins congratulates Neville and then asks for his championship opportunity. Neville tells him to be patient, but he says he’ll speak to Kurt Angle about a match if TJ Perkins can defeat Mustafa Ali.

9:23 – After their match, Cesaro and Sheamus mock the Hardy Boyz in the ring and brag about winning the Raw Tag Team Championship.

9:19 – Cesaro and Sheamus defeat Heath Slater and Rhyno in a match that only lasts about two minutes. The match ends when Sheamus pins Heath Slater.

9:15 – Backstage, Kurt Angle berates Samoa Joe. Joe says that he’ll take out anyone who gets in the way of Brock Lesnar, also threatening Kurt Angle. Seth Rollins enters. He challenges Samoa Joe to a match, and Angle books it for the main event.

8:57 – Samoa Joe enters. He says that he does not fear Brock Lesnar. He also says that he wants Brock Lesnar’s schedule in which he can show up whenever he wants and instill fear in people like Lesnar does. But most importantly, he wants the Universal Championship.

As Paul Heyman is getting ready to leave, Samoa Joe personally threatens Heyman and then locks him into a Coquina Clutch, which causes Heyman to pass out.

8:56 – Backstage, Dean Ambrose runs into Kurt Angle, asking him to set up a rematch with The Miz. Angle says that this can’t happen tonight because the championship celebration is scheduled, and so Angle tells Ambrose to take the night off. In fact, he demands that Ambrose leave the building right now.

8:51 – After attacking Elias Samson, Dean Ambrose says that he wants his rematch with The Miz right now. The Miz appears on the Jumbotron and says that there won’t be a rematch tonight. Instead, there is going to be a kickoff celebration for The Miz’s Intercontinental Championship Comeback Tour. While Ambrose is watching The Miz speak, he’s attacked from behind by Elias Samson.

8:48 – Elias Samson trolls the audience and sings a song about how the city he’s in is awful. He’s interrupted by Dean Ambrose, who enters and immediately starts attacking Samson.

8:41 – Backstage, Kurt Angle looks at his phone, saying that “this is driving me nuts.” Alexa Bliss enters, confused that Angle has not yet congratulated her. Bliss says that she’s done with Bayley, and tonight she wants to do a This Is Your Life segment about herself. Angle says that last week’s This Is Your Life was one of the worst segments ever on Raw. Angle has a better idea: Alexa Bliss should have a title match against Nia Jax tonight.

8:38 – Backstage, Enzo Amore says he has no idea who his attackers are, but when he finds out, he’s going to get his revenge. Big Cass says that it’s insulting that some people think he, Big Cass, was the attacker. Going forward, Big Cass says he’ll be watching Enzo’s back at all times.

8:00 – Bray Wyatt enters. He says that last night was the beginning of the end. He had a chance to slay the Beast and save everyone from damnation, Wyatt says, but instead, his sword was taken from him. Wyatt declares that he’s still here and is still as much of a God as ever. He’s here to cast judgement on all of those who are guilty, Wyatt says, including Finn Balor, Samoa Joe, Seth Rollins, and Roman Reigns. One by one they must all be punished, starting tonight with Roman Reigns, Wyatt concludes.

Roman Reigns enters. He grabs the mic right out of Bray Wyatt’s hands. He says that he’s the guy, and this is what happens when you run your mouth in Reigns’ yard; Reigns proceeds to punch Wyatt.