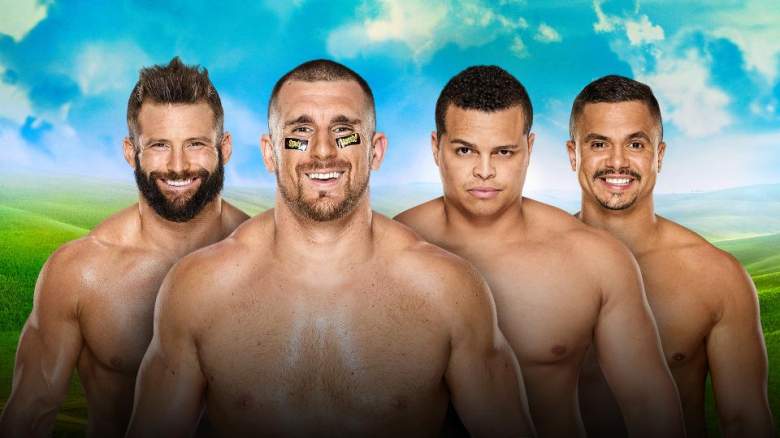 The Hype Bros will face The Colons on the Money in the Bank kickoff show. (WWE.com)

Money in the Bank, the latest WWE pay-per-view, is now just hours away. Before the event itself can begin, though, there will be a kickoff show, and these kickoffs always feature at least one match. So what has been scheduled for the kickoff show this year?

The Money in the Bank kickoff show will feature match between The Hype Bros (Mojo Rawley and Zack Ryder) and The Colóns (Primo Colón and Epico Colón).

This comes just days after Zack Ryder made his return to SmackDown Live. Back in December 2016, Ryder was legitimately injured during a match in which he and Mojo Rawley became the number one contenders for the SmackDown Tag Team Championship. Sadly, they never got to have that match because of Ryder’s injury. At the time, it was reported that Ryder would be out for anywhere between four and nine months, and so Rawley entered single’s competition. In January, Rawley won the Andre the Giant Memorial Battle Royal trophy at WrestleMania 33.

Now, six months later, Ryder has been cleared for action, and so he and Rawley have reunited, ready to take on The Colons. Formerly known as Primo and Epico, the Colons have been engaged in various feuds on SmackDown Live over the past few months, including with American Alpha and The New Day. But now The Usos have moved on to The New Day, and there’s another tag team in town, giving The Colons an opportunity for a match at Money in the Bank.

The Money in the Bank kickoff show will, as usual, also feature some discussion between the hosts, as well as some backstage interviews with WWE superstars. It will last for one hour, beginning at 7:00 p.m. and ending at 8:00 p.m. Eastern Time, at which point Money in the Bank can officially begin. The show this year is being headlined by a match between Jinder Mahal and Randy Orton, but there will also be two ladder matches, one for the men and one for the women.

Read More
Pro Wrestling, WWE, WWE Smackdown
Money in the Bank, the latest WWE pay-per-view, is now just hours away. It will begin with a kickoff show, so which matches will take place on this kickoff?