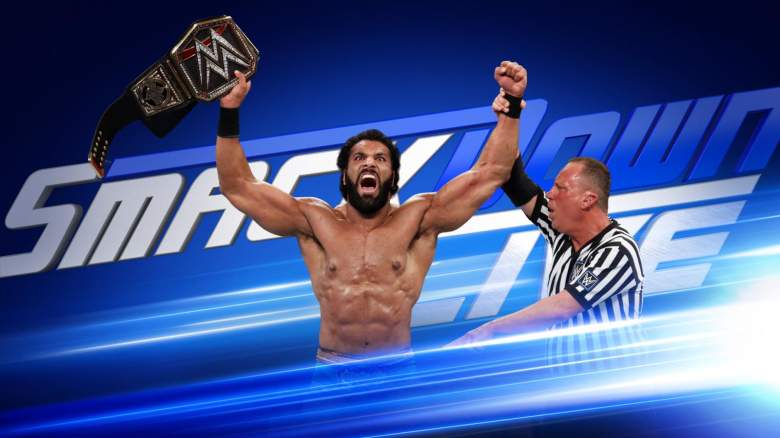 Tonight at Money in the Bank, Jinder Mahal retained his WWE World Championship. His feud with Randy Orton seems to have come to an end, so who will challenge Mahal for the title next?

Nothing has been set in stone quite yet, but the current rumor is that Jinder Mahal’s next opponent will be John Cena. Cena makes his return to the WWE on an episode of SmackDown Live on July 4th, two weeks from this coming Tuesday.

It had previously been rumored that John Cena would be challenging the WWE World Champion as soon as he returned. But last week, Sportskeeda specifically reported that Cena is set to face off against Jinder Mahal. At least part of this report turned out to be accurate, as Mahal retained the championship at Money in the Bank this Sunday and will therefore still be holding the title when Cena returns.

So when will this match take place? Well, Sportskeeda’s report states that it will happen at SummerSlam, which makes sense considering that this is the next pay-per-view involving SmackDown Live superstars. The only other pay-per-view between now and then is Great Balls of Fire, which is a Raw-exclusive event. It would be shocking if the WWE did not have plans for a Cena match at one of the biggest pay-per-view events of the year, and with The Champ making his way back to SmackDown Live just as Jinder Mahal wraps up his feud with Orton, the timing couldn’t be more perfect.

Cena has not been seen on WWE programming since WrestleMania 33, when he faced The Miz in the ring and proposed to Niki Bella. It was recently announced that Cena will return as a free agent, meaning he will be allowed to appear on both Raw and SmackDown Live. This is apparently an effort to boost ratings of both shows but especially of SmackDown Live, which has been struggling compared to Raw in recent months.

Still, it looks like Cena’s SummerSlam opponent will be a fellow member of the SmackDown Live roster. When Roman Reigns announced last week that he would soon be unveiling his plans for SummerSlam, many speculated that he would be challenging John Cena to a match at the August pay-per-view. However, Dave Meltzer of the Wrestling Observer reported this week that the plan is not currently for Cena to face Roman at SummerSlam. Instead, it is rumored that Roman will be challenging Goldberg to a match.

The next time Cena wins the championship, it will be a big deal, as he has currently had 16 reigns as a world champion. This means he is tied with Ric Flair for world championship reigns, and he will beat that record if he is able to defeat Jinder Mahal at SummerSlam.

Read More
Pro Wrestling, WWE, WWE Smackdown
Tonight on Money in the Bank, Jinder Mahal retained his WWE World Championship. Here's who he is rumored to face next.