For most of the NFL off-season, three players emerged as the consensus top three ranked players in fantasy football for 2017. Ezekiel Elliot has consistently been in this top tier, but this will be called into question if Elliot is suspended by the league.

ESPN’s Adam Shefter reported Elliott is “bracing for a short suspension” in addition to a “growing sense” around the league that Elliott will be suspended. Shefter estimated a one to two week timetable for the suspension, and noted a decision is expected in the coming weeks.

If Elliott is suspended for two games, he will likely see a slight drop in fantasy drafts. Prior to this news, David Johnson, Le’Veon Bell and Elliott have been the top three ranked players across most fantasy sites. The ADP (average draft position) reflects this as Fantasy Pros has Elliott sitting third in current ADP.

In a traditional league format, I would jump at the chance to draft Elliott at the end of the first round even with a two-game suspension. Last year, Bell was suspended for the first three games of the regular season. Bell typically was drafted at the top of the second round and sometimes sneaked into the first round.

The big question is how fantasy owners will compare a suspended Elliott with other running backs going in the first round. LeSean McCoy, Melvin Gordon and Devonta Freeman are all going in the first round of drafts in 12-team leagues. With McCoy’s injury history and Freeman in a crowded Falcons backfield, I would take a suspended Elliott over these other top running backs.

Will other fantasy owners feel the same? Elliott could settle into the seventh slot after wide receivers like Antonio Brown, Julio Jones and Odell Beckham Jr.

Given Elliott’s suspension is not as long, fantasy owners should still expect Elliot to be selected inside the first round. Last season, Elliott rushed for 1,631 yards and 15 touchdowns in 15 games. Elliott also had 363 receiving yards and a touchdown. Elliott’s numbers were likely to take a slight step back regardless of the suspension, but fans can still expect him to put up similar totals in 2017.

A short suspension has little impact in dynasty leagues, but will cause owners to pause longer when thinking of Elliott’s future when compared to other players like David Johnson. Elliott has had lapses of judgment in his short NFL career. 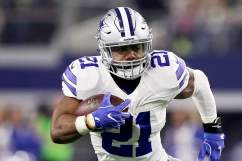