Hugh Freeze’s wife had been a big part of the Ole Miss program. Jill Freeze did a lot of behind-the-scenes work to not only help her husband, but play a role in lives of the coaches wives.

Hugh resigned at Ole Miss amidst swirling allegations including a report that he used a phone paid for by the university to call a Tampa escort service. Hugh has denied the allegations noting the number was dialed by accident.

Former Ole Miss coach Houston Nutt brought a lawsuit against Ole Miss for defamation. In the midst of the legal process, Nutt has also brought allegations of misconduct against Hugh.

It is not the first time the two former Ole Miss coaches have been linked. Hugh was part of Ed Orgeron’s Ole Miss coaching staff when Nutt took over. According to Mississippi Christian Living, Hugh expected to remain on staff, but was let go by Nutt.

Jill admitted it was hard for the family, and her interview takes on even more meaning in light of Nutt’s lawsuit. It is important to note the feature was conducted prior to the most recent news involving Nutt and her husband.

“I probably had a grudge against Houston Nutt at one time, but I realized that it was God who didn’t give Hugh the job of offensive coordinator back then,” Jill told Mississippi Christian Living. “In my mind I was praying for offensive coordinator, but God had in mind something better— Head Coach. I just had to wait to see that happen.”

1. The Couple Got Married in 1992 in Independence, Mississippi

Thanks babe. You are the best. pic.twitter.com/X6mVC5c61U

According to Mississippi Christian Living, the couple got married in 1992 at a Baptist church in Independence, Mississippi. The Freezes then headed to Gatlinburg, Tennessee for their honeymoon.

The couple started The Freeze Foundation in 2014 in an effort to help children in need. Here’s how the foundation describes its mission. 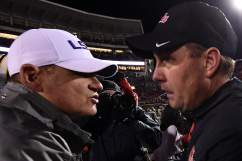 2. Jill Led a Weekly Bible Study for the Wives of the Ole Miss Coaching Staff

Being a spouse of a college football coach can be difficult. Families are often on the move as coaching staffs change every year. Coaches also work long hours causing them to be away from their families. Jill was passionate about caring for the coaches’ wives and led regular Bible studies with the ladies.

“We take the list of our players, walk-ons, red shirts—all of them—and we divide it up and pray for those on our list by name that week,” Jill told Mississippi Christian Living. “We also send them a card by Thursday of the same week. When you see the difference in these young men’s lives, it is worth it. I just think the letters help us as much as they help the players because we women are relational. We see that what our husbands do is about more than a trophy. This is just my part in Hugh’s job.”

We had an awesome experience @deepsouthpout thank you so much! Can't wait for cyber Monday! So many cute things! pic.twitter.com/vSXWau9FDs

The couple has three daughters, Ragan, Madison and Jordan. Their oldest daughter, Ragan, recently graduated. Hugh tweeted out: “Ragan’s graduation tonight! I’m a proud dad 4 the young lady U are &ready 2 see you go Chase some Lions as u seek to honor God! All my love.”

Mississippi Christian Living described how important the role of faith has been in Jill’s parenting style.

Jill believes wholeheartedly in the power of prayer, and she longs to leave a legacy of prayer in her daughters. They talk about their prayer requests with each other. She is a fan of Mark Batterson’s book, The Circle Maker, and she delights in drawing circles around different requests and loves to tell her daughters when she sees an answer and gets to draw a great big X across that circle.

4. The Family Was Featured in The Blind Side Book & Eventually the Movie

At the time of The Blindside, Hugh was not a household name, but that changed after the movie The Blind Side came out in 2009. The film focused on the story of offensive lineman Michael Oher. Michael lacked family stability and spent time homeless. Hugh was Michael’s high school coach at Briarcrest Christian School in Memphis, Tennessee.

Michael would stay at the Freezes’ house at times. Jill spent time tutoring him to help with his classes. The movie was based on a Michael Lewis’ book released in 2006.

5. Jill Graduated From Southern Miss & Has Worked as a High School Teacher

Now, she focuses on outreach to other coaches wives as well as their foundation work. Jill is active on social media often tweeting out Bible verses and inspirational quotes.

Read More
College Football, Football, Ole Miss
With his recent resignation, Hugh Freeze and his family have been in the public eye. Learn more about Hugh's wife, Jill Freeze, and the couple's children.