Tonight is the 2017 ESPY Awards and Peyton Manning is on board as the host. Over the years, one of Manning’s features that has been a topic of conversation is the size of his forehead. Is it growing bigger? What is its length? There are even websites, YouTube videos and threads dedicated to the topic. For example, there is even a Facebook page titled “Peyton Manning’s Forehead” and you can check it out by clicking here. And, the tagline for the profile reads, “It’s big. Bigger than Chris Collinsworth’s mouth.”

People have even posted about Manning’s forehead on UrbanDictionary.com, listing its definition as this:

Literally the biggest forehead in the world.

When used in a sentence on the site, the example written is, “My plane just landed on Peyton Manning’s forehead.”

In 2012, when Manning was photographed with a large purple mark on his forehead, fans began to speculate about the reasons behind the mark. Was Manning’s helmet too small? A few years later, Stanford Flipside reported that connections to a steroid ring could explain the large size of Manning’s forehead, but this has not been confirmed. And, in 2015, Manning fired back at rumors of steroid use, telling ESPN:

According to the NY Times, the person Manning is talking about is a man named Al Jazeera.

So, how big is Peyton Manning’s forehead exactly? The only report we have seen is on Wiki Answers, with the site stating it’s size as “about 31.234 cm long and about 20.349 cm high.” 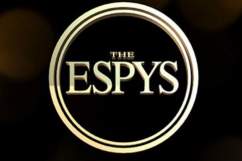 Read More
ESPYs, Peyton Manning, TV
Peyton Manning is hosting the 2017 ESPY awards and some fans are wondering about his forehead. Does it appear to be growing in size and length?