WWE.com Kurt Angle reveals that Jason Jordan is his son.

There’s not a whole lot of information out there about Jason Jordan’s father, but there are a few pictures of him available via Jordan’s wife’s Instagram. April Everhart posted a photo of Jordan and his dad in December 2014 with the caption “Father & Son.”

There’s also this one from February 2017:

Damn Amal your backpack won't let Nate be in the picture! ????

April Everhart posted a photo from her wedding to Jason Jordan earlier this year, saying in the caption that she now has another mom. That’s April’s mother on the left and Jason Jordan’s mom on the right.

This year I got another Mom and she's just as funny as the other! Happy Mother's Day to all the fun & crazy Mommas!

Jordan’s father has been at some of his son’s wrestling shows. Back in December 2016, when American Alpha won the SmackDown Tag Team Championship, Jordan’s dad was there to see the win.

“My mom, my dad and my niece were front row,” Jordan told the Miami Herald. “Chad had his mom, his dad, his wife, his baby girl. They were all front row as well. I had a lot of friends in the crowd, too. It couldn’t have gone any better.”

Indeed, when American Alpha won the title, the SmackDown Live broadcast briefly cut to Jordan’s father celebrating alongside Jordan’s mother and niece. He was indeed in the front row wearing an American Alpha shirt, and he seemed pretty excited.

WWEJason Jordan’s parents and his niece celebrate his win on ‘SmackDown Live.’

Jason Jordan was born in Tinley Park, Illinois in 1988, the youngest of four boys. He revealed on an episode of WWE Breaking Ground in 2015 that two of his older brothers are incarcerated, and one of them is in prison for life. Jordan says that this is something that motivates him.

“My motivation comes from a negative place,” Jordan said on the show. “…I’ve seen my brothers hit rock bottom. I know what that place is. And all that’s done is motivate me to pursue my dream.”

He also told ESPN of his brothers, “I was always close with them, had ups and downs with them.”

The following photo was shown on the WWE Breaking Ground episode during this segment with Jordan talking about his brothers:

In some ways, Jason Jordan, whose real name is Nathan Everhart, has his father to thank for his wrestling career. After all, Jordan has said that when he was growing up, his parents had a group of friends they would see all the time, and one of these friends had a bunch of wrestling tapes that Jordan became obsessed with.

Jordan said in an interview with The Whig, “I just remember my parents had this very close group of friends they would always get together…We’d always go their one friend’s house and this guy had boxes and boxes of these old WrestleMania and WWF tapes in the basement. I loved going there more than my parents did hanging out with their friends because I could go downstairs and watch wrestling. I would always pick a new tape and watch it.”

On Twitter in 2015, Jason Jordan paid tribute to his (real) father, saying that he would not be where he is without him.

#HappyFathersDay to all the Fathers out there & a special thank you to my Dad! Without your influence and support I wouldn't be where I am!

And in 2012, Jordan responded to a tweet asking who his hero is. Ironically, Jordan gave two answers: in real life, his father, and in wrestling, Kurt Angle.

@fan4wrestling in life: my father. In the world of wrestling: Kurt Angle!

The Angle reveal doesn’t mean that Jason Jordan has to pretend his real father doesn’t exist or that the WWE has to avoid shots of Jordan’s dad sitting in the front row at future shows, though. In an interview on the WWE Network after Raw this week, Jordan said that he found out he was adopted after college and that he owes a lot to his parents but still wanted to find his real dad. That’s all true of his fictional WWE persona, at least.

“I’m grateful for…the unconditional love and support that my mom and dad have shown me,” Jordan said on the WWE Network. “You know, there’s more to being a parent than just biology. You have to show up day in and day out, and my parents did exactly that for me, and I’m grateful for that.”

Jason Jordan’s actual father, then, can still exist in kayfabe as the man who raised him, even if Kurt Angle is his biological dad on TV.

Some fans have a theory, though, that within the reality of Raw, Angle is being bamboozled and that Jason Jordan isn’t his son at all. Read more about that theory here: 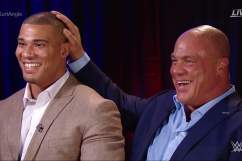