The back-and-forth beef between Philadelphia 76ers young star Joel Embiid and the outspoken father of Los Angeles Lakers rookie PG Lonzo Ball, LaVar, has been well-documented to this point. While it all began with Embiid tweeting for Ben Simmons to dunk on Lonzo so hard that “his daddy runs on the court” at the 2017 NBA draft, it then turned into a spiral of tweets and videos.

Please dunk on him so hard that his daddy runs on the court to save him.. https://t.co/cMvt5RYiSQ

Then, LaVar Ball responded in an interview with Philadelphia’s 97.5 The Fanatic, via For The Win’s Andrew Joseph.

“When you don’t win, and don’t even make the playoffs, and don’t even stay on the court long enough, that’s the best thing you can do—is tweet and make some stuff. Ain’t nobody else doing that, because they’re working on their games in the gym. These guys ain’t played a game, always hurt, and at the bottom of the totem pole. So guess what? Get your asses off the (expletive) Tweeter and get in the gym.”

From there, Embiid ripped Ball and NBA Executive Vice President of Basketball Operations Kiki Vandeweghe announced the 76ers star had been fined $10,000 by the NBA, via Alex Kennedy of HoopsHype. It’s essentially just been one intense circle of talking between the two, who obviously don’t like each other very much.

But now, Embiid has taken one more shot at Ball, and this time it was about the Big Baller Brand. In a video by TMZ Sports, Embiid was asked how much it would take for him to wear a pair of the Big Baller Brand shoes. After originally saying nothing, as in he wouldn’t wear them, he then changed his mind and decided on a number.

So hey, maybe there’s the chance that Embiid and LaVar can put their differences aside, but it’ll apparently cost the Big Baller Brand a hefty $1 billion. It’s probably a safe bet that this will never, ever happen, and also that neither of these two are going to let bygones be bygones anytime soon either.

Just wait until the 76ers square off with the Lakers, because that may wind up being must-see TV if LaVar is anywhere near the floor and Embiid happens to spot him. 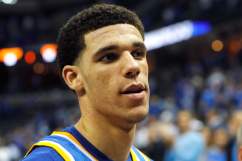