Spieth had also birdied on hole 14 and then birdied hole 16 after his incredible eagle on 15. Spieth’s birdie-eagle-birdie gave him a two-shot lead over Matt Kuchar. Both golfers birdied hole 17, and Spieth’s par on 18 sealed the victory for the 24-year-old.

Here’s a look at Spieth’s excellent birdie-putt on hole 16:

A look at @JordanSpieth's birdie on No. 16 that gave him a two-shot advantage.pic.twitter.com/mSBB9n8608

Spieth’s excellent run on the back nine came after some of his worst play of the tournament. On the 13th hole, Spieth hit a bad tee-shot that ended up with an unplayable lie. He took an adventurous, bizarre drop that took 20 minutes, as he decided to take the drop on the driving range by equipment trucks despite a large sand dune blocking his vision to the green. Spieth ended up bogeying the hole. He had lost the lead for the first time in the tournament and was in danger of losing, before his incredible birdie-eagle-birdie run on 14,15 and 16.

Spieth is now the second-youngest golfer, after only Jack Nicklaus, to complete the first three legs of a career Grand Slam. 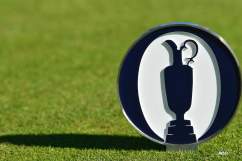 Read More
Jordan Spieth, PGA, PGA Tour
Jordan Spieth drained a long eagle putt on hole 15 to regain the lead in the final round of the 2017 Open Championship.