There’s always additional facts about stories that don’t immediately come to light, and the story of Kyrie Irving looking to be traded from the Cleveland Cavaliers just added another layer of interest. While ESPN’s Brian Windhorst originally reported that Irving’s desire to be traded was focused around looking for a bigger role and the fact that he no longer wanted to play with LeBron James, it seems there’s more to it now than just that.

There’s no doubt that Irving is largely pushing for this trade because he wants to be the centerpiece of a franchise, and more importantly be able to have the ball in his hands as the lead playmaker. But, as ESPN’s Ramona Shelburne, Dave McMenamin and Brian Windhorst reported, his frustration with the Cavaliers has been going on for quite a while.

Irving had reportedly been “thinking about this day for some time,” and had reached out to people around him to get advice on how to go about the process. But as Shelburne, McMenamin and Windhorst pointed out, the Cavaliers actually knew that Irving was unhappy playing a secondary role on the team, and former general manager David Griffin had “several conversations” with the point guard throughout the year in attempts to improve the situation.

Then this offseason happened, and as the trio of ESPN reporters pointed out, once Griffin and assistant GM Trent Redden were no longer with the franchise, things went south quickly for Irving.

“What followed was a whirlwind, with the Cavs putting forth a series of trade packages looking to acquire either Butler or George. Some of these talks included Irving, which upset him even more when he found out about it, sources said. Previously, Griffin had worked to keep lines of communication with Irving open, but now Irving was in the dark.”

Putting a player who was already obviously frustrated in this situation was a tough call, and obviously, when Irving found out about it there was no question that he’d react accordingly.

All of this poses an interesting question of whether or not these earlier attempts to trade Irving is actually what left him pushing for a trade of his own in the end. Now, the Cavaliers are stuck between a rock and a hard place, as they have to try to either find the best package they can for Irving or try to fix a situation that seems almost completely broken.

The latter seems highly unlikely, but it’s also unknown exactly what the Cavaliers could get back in return for Irving at this point, with other franchises knowing that the point guard is disgruntled. Time will tell, but it seems more likely than not that Irving will not start the 2017-18 NBA season in Cleveland. 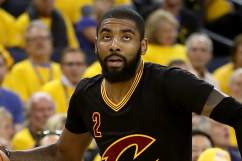