For Los Angeles Lakers No. 2 draft pick Lonzo Ball, the start to his NBA career couldn’t have gotten off to much worse of a start. Fortunately, it was just a Summer League game and one that will be quickly forgotten if he’s able to turn it around over the rest of the week.

In Ball’s debut for the Lakers, the team fell to the Los Angeles Clippers on Friday 96-93 in overtime. His final stat line included 2-of-15 shooting (13.3 percent) while going 1-of-11 from 3-point range (9.1 percent), with five assists, four rebounds, three turnovers and two steals in 32 minutes. The shooting performance was woeful, but neither he nor his always outspoken father LaVar Ball seemed too concerned about it.

As Jon Krawczynski of the Associated Press reported, LaVar went as far as calling it his “worst game ever.”

“He don’t be discouraged because that’s the worst he can do,” LaVar said. “He can’t go but up. And he still kept them in the game playing his worst game ever. That’s what I like about it.”

Sports Illustrated’s Ben Golliver also got the clip of Lonzo’s father speaking after the game to a group of reporters.

LaVar Ball on Lonzo Ball's debut: "His worst game ever… [but] he changed the Lakers' culture." pic.twitter.com/u8g4OYJiey

Krawczynski also spoke with Lonzo, who simply stated that he needs to “be better.”

“Tough game. We didn’t get the job done,” Lonzo said. “I need to be better. The only way to go now is up. That’ll probably be the worst game I’ll have all week, so hopefully I keep getting better.”

It’s hard to argue with the points made by both LaVar and Lonzo. It was his first career game and there’s a very small chance that he winds up having a game that’s worse than this throughout the rest of the Summer League. To go along with that, as bad as things were, the Lakers still only lost by three points in overtime. While a performance like this one in his actual rookie debut in an NBA game wouldn’t be brushed under the rug quite as quickly, there’s not much concern about it currently.

If there’s a lone bright spot to take away from the game, it’s that second-year forward Brandon Ingram looked impressive, shooting 52.9 percent from the field en route to 26 points. The Lakers and Ball will square off with the Boston Celtics and Jayson Tatum on Thursday night so Lonzo will get a chance to redeem himself quickly. 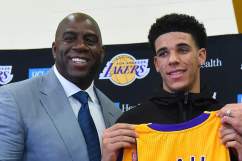