The Miami Heat decided that their group which was dominant during the second-half of the 2016-17 NBA season wasn’t broke, so they weren’t going to fix it. After the Heat reeled off a league-best 30-11 record to finish last season, they were left just barely on the outside of the playoffs looking in. Now, they’re going to take a run at it once again, and are doing so with some familiar faces and one or two new names as well.

It’s been a very busy past two days for the Heat and ESPN’s Adrian Wojnarowski, who broke the news of multiple re-signings and one new signing for the team. As he first reported, it was guard Dion Waiters who chose to re-sign with Miami on a four-year, $52 million deal.

Sources: Dion Waiters has agreed to a 4-year, $52M deal with the Miami Heat.

Then came a big move when Miami signed a new big man from the Boston Celtics in Kelly Olynyk to a huge four-year, $50 million-plus contract.

Finally, James Johnson, who’s excelled during his time with the Heat chose to come back on a four-year deal of his own, according to Woj.

Free agent James Johnson has agreed to the framework of a four-year deal to stay with the Miami Heat, league sources tell ESPN.

All-in-all, it was a few solid moves for the Heat and ones that should not only get them back into the playoffs but potentially help them push up the watered down Eastern Conference. After everything, let’s take a look at the Heat’s updated roster and breakdown how they could look heading into the 2017-18 season.

Obviously, there’s a good chance that Olynyk could play power forward and James Johnson could shift to small forward as well. To go along with that, Josh Richardson and Wayne Ellington could both pair up with Dion Waiters in a small-ball lineup, so overall the Heat have a pretty nice well-rounded lineup heading into the season. Realistically, this group should probably have better odds than they currently do to potentially push for an Eastern Conference title.

The signing of Olynyk cost the Heat a lot of money, but over his four seasons with the Celtics, he’s shown flashes of being able to really produce. In each of the past three seasons, he’s averaged more than nine points and four rebounds in just over 20 minutes per game. If he’s able to see more run with the Heat, which seems certain, he could be a nice breakout candidate for the upcoming season.

As for the re-signings of both Waiters and Johnson, those are likely the two biggest moves. Waiters impressed with averages of 15.8 points and a career-high 4.3 assists per game last season, even though he played in just 46 games due to injury. As for Johnson, the veteran who had bounced between five teams in his eight-year career, broke out to the tune of 12.8 points, 4.9 rebounds and 3.6 assists per game in 27.4 minutes per game.

If the end of the 2016-17 season was any indication, the Heat should be in for a big season and possibly even home court advantage in the playoffs. 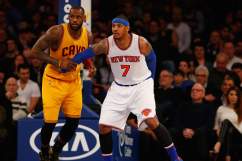