On October 3, 1995, O.J. Simpson learned his fate. It was on that day that a jury of his peers acquitted him of murder.

Simpson was arrested on June 17, 1994, four days after his ex-wife, Nicole Brown Simpson and her friend, Ronald Goldman, were found murdered, stabbed to death outside of Brown’s home in Brentwood, California. Simpson was the prime suspect in the case.

Simpson was arraigned on June 20, 1994. He pled “not guilty” to both first degree murder charges. The former footballer was held without bail. His trial began on January 24, 1995, and was televised. Millions of people tuned in, wanting to see the evidence presented, listen to the various testimonies, and ultimately find out if Simpson was guilty of murder.

“Simpson’s subsequent criminal trial was a sensational media event of unprecedented proportions. It was the longest trial ever held in California, and courtroom television cameras captured the carnival-like atmosphere of the proceedings,” History.com reports.

In 1997, Ronald Goldman’s parents, Fred Goldman and Sharon Rufo, filed a wrongful death lawsuit against Simpson. Simpson was also sued by the Brown family. The jury in the civil trial decided that Simpson was “responsible” for both murders. He was ordered to pay the families a total of $33.5 million in both compensatory and punitive damages. Over the past two decades, Simpson has only paid a small percentage of that amount.

“In February 1997, Simpson was found liable for several charges related to the murders in a civil trial and was forced to award $33.5 million in compensatory and punitive damages to the victims’ families. However, with few assets remaining after his long and costly legal battle, he has avoided paying the damages,” reports History.com.

To this day, no one has been held accountable for the deaths of Nicole Brown Simpson and Ronald Goldman. No one else has been charged with murder in the case. 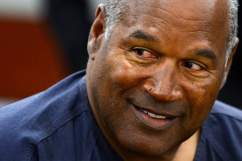 O.J. Simpson’s Net Worth: 5 Fast Facts You Need to Know