[Update]: O.J. Simpson was granted parole following a unanimous decision by the Nevada State Parole Board.

O.J. Simpson’s parole hearing will take place on Thursday, July 20. The former footballer will learn his fate during the hearing which is set to begin at 10 a.m. Pacific (1:00 p.m. Eastern). The proceedings will air live on ESPN, according to Deadline.

According to the report, “about 30 news organizations have registered to cover the hearing.” This means that other news stations may also air the hearing either in part or in its entirety. Those who are unable to be in front of a television during the hearing should be able to watch a live stream on ESPN’s website. Additional news stations may also be running live streams available on social networking sites such as Facebook.

Although he’s up for parole, Simpson will not physically appear in court, according to Page Six. Instead, he will be in attendance via video conference from Lovelock Correctional Center where he has served a total of eight years behind bars. He was sentenced to nine-to-33 years in prison after being found guilty of armed robbery back in 2008.

A panel of four parole commissioners will decide whether or not to offer Simpson parole. If he is granted parole, he could be a free man as early as October 1, 2017.

According to a former Lovelock prison guard, Jeffrey Felix, Simpson has been a bit worried about the media mayhem that is set to occur later today.

“The Juice is sweating it over the parole hearing. He’s been told there will be media tents outside, pool reporters in his room and the Carson City hearing room, and cameras sending a live feed to the media outside. He is asking why they are fostering a circus-like environment for his hearing. O.J. thinks he deserves his parole — he’s been clean for nine years, hasn’t had any write-ups, took all the programs and classes they told him to take — but he thinks all this media hype is going to screw with the parole board and put pressure on them to keep him locked up. The media still portrays him in a negative light because he was acquitted of the murders [of Nicole Brown and Ron Goldman],” Felix told Page Six. 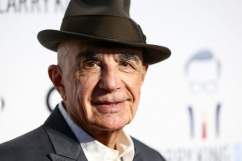